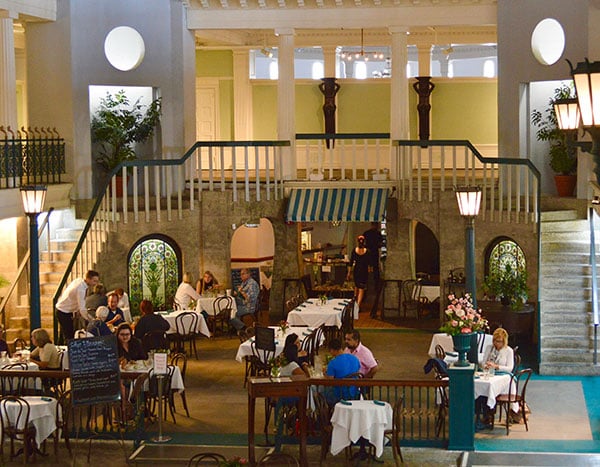 By Valerie Sisco, Culture with Travel Food Correspondent and founder of Grace with Silk

Since I live in Florida year-round, I’m not sure I know exactly what it’s like to be a tourist traveling from the North during the winter to stay just for a season. But, I do head north to visit St. Augustine once a year, since it’s only a two-hour drive from my home in Orlando.

What I love about St. Augustine, the nation’s oldest city founded in 1565, is that you can catch a glimpse of the major historical eras in its history just by walking through the narrow brick and cobblestone streets. Spanish-style homes, colonial architecture and Victorian-era houses stand side-by-side throughout the historic district, along with the three beautiful hotels built in the 1880s by Henry Flagler.

More than a hundred years later, even though the hotels are used for other purposes, they’re all still available for tourists to visit for a peek inside the gilded era in Florida’s history.

Flagler was a railroad and oil businessman who made traveling to Florida more accessible. He first built the Ponce de Leon Hotel, which is today Flagler College, and then he added the Cordova Hotel, which is now the Casa Monica Hotel.

With the addition of the Alcazar Hotel in 1888, he had a trio of grand hotels in St. Augustine, transforming the little town on the bay front into a winter playground for the wealthy. The Alcazar was his flagship, giving tourists a wide array of recreational activities including sulfur baths, a steam room, gymnasium, bowling alley, archery ranges, tennis courts and a bicycle academy.

But the hotel’s main attraction was that it contained the world’s largest indoor swimming pool at the time. Today, that hotel is now the Lightner Museum and the former swimming pool is the Alcazar Cafe, an eatery serving lunch in the deep end of the pool.

It’s a little eerie to sit at a table sipping iced tea, in a space that was once covered by water. Vintage photos are on display around the cafe, showing the four-story pool area, with a glass ceiling that could be opened for star-gazing. An artesian well provided the pool with fresh water, and a gallery on the second floor allowed visitors to watch the swimmers if they didn’t want to test the waters for themselves.

I’m not sure what type of food winter tourists would have enjoyed, but I have to imagine it must have included oranges and grapefruit since Florida was filled with citrus groves back then. When my sister and I ordered lunch, I opted for the turkey sandwich with sliced apples and cranberry aioli toasted on multi-grain bread, while she tried the house specialty of a Panini Alcazar with grilled asparagus.

Even with a pianist providing live background music, the ambiance is hushed and conversation echoes since the space is so immense. As I sat at my table looking at the old photos, it wasn’t hard to imagine a major women’s swimming championship being held here in the 1920s, and envision a huge gondola that once floated through the water for a special hotel event.

Staying in Florida without air conditioning seems incredibly uncomfortable to me and I wondered how humid and steamy the pool must have felt even during warm winter days. If that era was considered opulent and self-indulgent, I’m curious what they would have thought of us with our climate-controlled homes, swimwear for ladies that doesn’t involve knee-length dresses and hats, and pools for men and women to enjoy together instead of at separate swimming times.

If it weren’t for the three beautifully restored Flagler hotels, how else would we know that tourists of long ago could experience the spectacle of 1,000 incandescent lights, have the convenience of renting a wool bathing costume and would need a license to ride one of the hotel’s bicycles?

I’m glad that Florida isn’t just for wealthy travelers escaping the winter anymore, but is the playground for spring-breakers, summer vacationing families and retirees looking for a warmer climate.

And today, some of us even choose to live here year-round.