Savoring the Earthy Flavors of Umbria 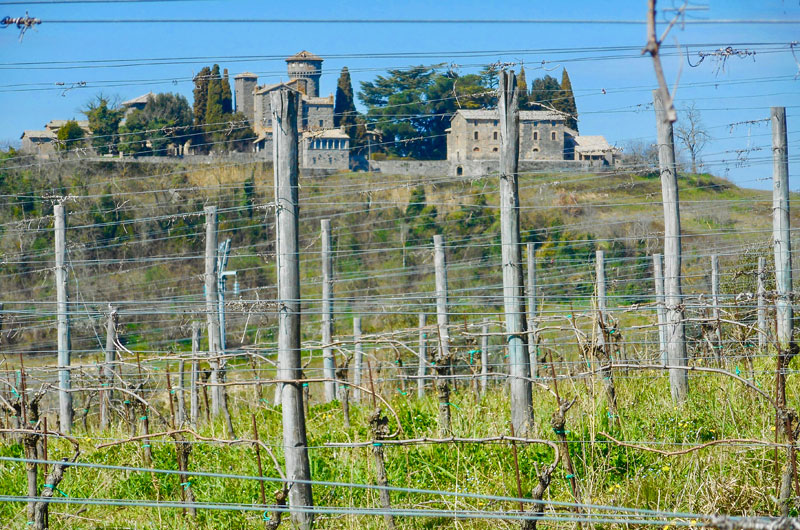 I open my kitchen cabinet and grab the tall green jar of olive oil. I pour out a little on a plate and sprinkle some Italian herbs over it. I dip a slice of warm bread in it and make sure I capture every drop with the last bit of crust.

Then I wonder what I’m going to do when the olive oil runs out.

I wish it were just a matter of restocking my pantry, but this olive oil is from Italy and it’s made in such small quantities that it’s not available to buy online.

Maybe it’s so special to me because I walked on the dirt where the olives grow and gathered around an Italian farmhouse table to taste it. Or maybe I treasure it because it was so unlike me to impulsively splurge on the hefty delivery fee to have the olive oil shipped from Italy to the U.S. But it’s also possible that there might just be something remarkable about the earth and water in the hills of Umbria that’s not like anywhere else.

An hour and a half outside of Rome is Madonna del Latte, a small family-owned winery and olive oil producer in Orvieto. A mini-bus takes me and my touring group of foodies to this farm in central Italy, where it benefits from the volcanic mineral soil.

Rome’s busy freeways fade from view as our driver takes us down smaller and smaller roads, with signs pointing the way to Orvieto as we pass through village crossroads. Finally after climbing up a steep gravel lane, the mini-bus parks in front of a bright yellow sprawling house where owner Leon Zwecker is waiting to greet our group. He invites us to walk with him through the fields filled with growing grapes, while he tells us a little about his family and their winemaking process. The farm is organic, located near a mineral water source so they’ve opted not to use fertilizers or pesticides.

Leon explains that the vines work hard to find good soil among the sand and rocks and that effort affects the quality. It’s the struggle of the grapes’ journey to get through the levels of soil that makes good wine,” he says.

{This winemaking observation strikes me as a good philosophy for life, too.}

He takes us down to the barrel cellar dug in the volcanic rock where the wine is aged in French oak barrels and explains its history. As early as the sixteenth century, popes appreciated the area’s prospects for winemaking in its sandy volcanic soil and had wines from Umbria shipped to Rome. Leon thinks that the underground cave may have originally been an Etruscan tomb, although he’s quick to point out there’s nothing official to verify the site.

We visit the modern fermentation cellar that houses the wine-producing equipment and learn that the farm also produces extra virgin olive oil, made from their olive trees. Finally, it’s time to taste as we head back to the farmhouse to gather around a table set for sampling six wines: one sparkling, two whites, one rosé, and two reds.

The table holds baskets of bread, along with organic goat cheese from our earlier visit to a neighboring goat farm for us to enjoy with the olive oil. I’m not particularly knowledgeable about olive oil but I know there’s your run-of-the-mill type that’s available in grocery stores and more expensive specialty olive oils, but I’m not sure I can tell the difference.

I spread goat cheese on my bread and dip it in the oil. I know right away that I’ve never tasted olive oil this flavorful before. At first, I think it’s too pungent for me, but something about it makes me want more.  I don’t recognize the flavor until Leon tells us that it tastes like raw artichokes, which is typical for olive oils from central Italy. After a few more bites of bread dipped in the oil, I feel as if I could lick the plate to get the last drop. {Since I’m with a group of foodies, I refrain even though they’d probably understand.}

All of the wines are very good too, and my fellow tour-goers all decide to place orders to have wine and olive oil shipped to their homes. There’s a minimum required but since I’m feeling a little giddy with drinking so much wine before lunch, I surprise myself and place an order too.

Less than a month after I return to the U.S., the wine and olive oil are delivered to my door. I wonder if I’d gotten carried away that day in Umbria, but as I pour out the olive oil, just one taste convinces me that it’s as good as it was in Italy.

I know someday I’ll eventually soak up the last drop and I’ll have to find a brand of olive oil I can get in the U.S., but until then, every time I taste it I imagine I’m back on a farm in Italy.

And when no one’s around, you might even find me licking the plate.