Traveling Foodie: Not at Home in the Kitchen 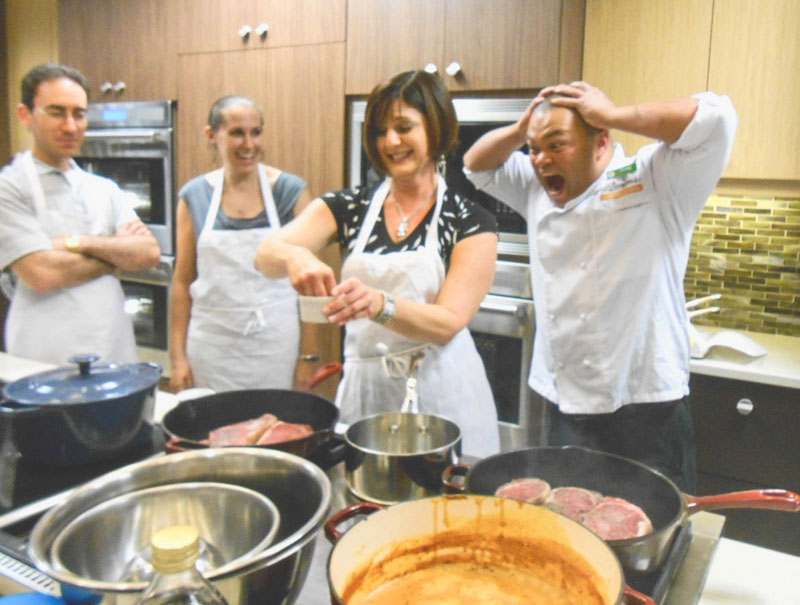 I rarely cook at home, but somehow when I travel, a cooking class is usually on my itinerary. I think traveling brings out my inner chef and fires up my cooking aspirations.

I’ve packed up my half-baked culinary dreams and taken them to Lake Como in northern Italy where I learned how to roll out pasta and make homemade tiramisu. I signed up for a pastry class in a Manhattan bakery, where I learned how to bake scones and shortbread cookies. And I’ve tied on an apron in a food writer’s kitchen in Rome where I peeled artichokes and shredded puntarella.

I had hoped that with these national and international classes added to my cooking resume, maybe I could work with more culinary confidence in my own kitchen. But just to add a little icing on the cake, I signed up for a six-week basic culinary course at a cooking school in my hometown of Orlando.

It turned out to be more like cooking boot camp. The chef told me I had timid knife skills and I needed to cut with more confidence. After admitting I was a little afraid of raw meat, the chef assigned me to the hot stove with a platter of raw chicken and beef to help me conquer my completely irrational and ridiculous {according to him!} fear of searing.

My fellow chefs-in-training all seemed to have much more cooking experience and greater skills than I did and I wondered what they were doing in a basics class. I picked up a few tips though — and a particularly chef-centric skill — that when he says to add some salt, height makes all the difference as you sprinkle it from your hand high over the food to evenly distribute the seasoning. {And I also discovered there’s far more salt in flavorful food than I’d ever imagined!}

I left those classes with a sheaf of recipes to try but instead of feeling inspired to cook with my new skills, I came to the conclusion that it’s a lot of work to break out the pots and pans. Most evenings I just end up tossing a salad for dinner from a pre-washed bag of lettuce.

I discovered that maybe I only like to cook when I travel.

When I’m caught up in an adventure with a group of eager vacationers, I’m not hampered by my bungling knife skills and squeamish aversion to meat. I’m happy to join them in topping bruschetta with spoonfuls of diced tomatoes, stirring eggs into flour for pasta dough, or taking a break while the Italian coffeepot slowly brews on the stove before being poured into the tiramisu.

Making dishes from the region where I’m traveling means that my cooking class colleagues aren’t usually experts in what we’re creating. Not many of my fellow cooking travelers had made fresh pasta as we rolled and cut out noodles in Milan. Even fewer had peeled giant artichokes or pushed puntarella stalks through a grater like we did in Rome.

Back home, I decided to give cooking classes one more try so this summer I signed up for a Saturday morning of pickling and preserving. I was excited to think this might finally be my jam, but my high hopes were snuffed out when I was assigned to work at the fryer.

With okra. The humblest of vegetables.

While my fellow cooks were whisking fruit preserves into batter for our clafoutis dessert, stirring apricots on the stove, and roasting giant golden peppers on the grill for bruschetta, I was frying okra.

I don’t think I’ve ever tried to deep-fry at home due to the mess it leaves in my kitchen and the strong aromas that permeate my hair. But after the third basket of okra, my clothes were spattered and I gave up caring about my hair. I guess that was good since the chef said I might as well do the chicken cutlets too since I was already at the fryer. {And I hadn’t even mentioned my aversion to meat.}

So now I think I’ve worn out my desire to take cooking classes. Maybe I really don’t care for cooking all that much. At least at home. But I think I’m still going to cook when I travel because when I’m on the road, cooking feels more like an adventure. And a community.

The real highlight of cooking while traveling is gathering around the table with a group of strangers who’ve become friends to enjoy the delicious creations we’ve prepared. Toasting to good health and great journeys with our glasses of wine, we share stories about traveling far from home. Carrying these memories home with me is a scrumptious souvenir that I don’t have to pack in my suitcase but I can savor for years to come.

Have you taken cooking classes while traveling or taken a culinary adventure? Share in the comments!