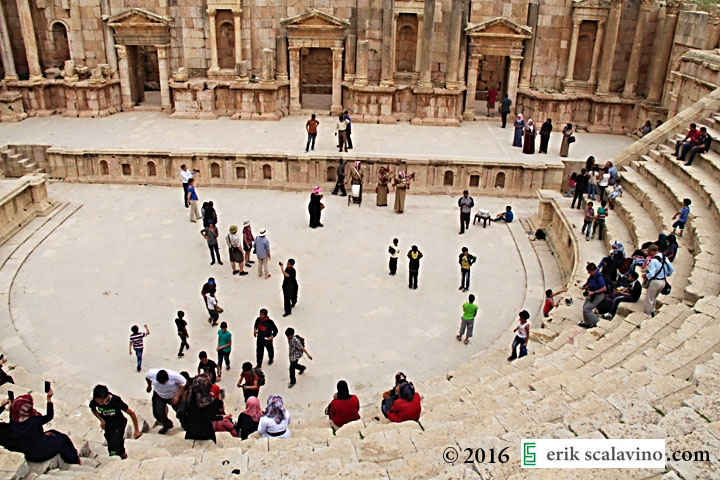 AMMAN – Try as you might, you won’t find cheese steaks or Rocky Balboa in this town, which the ancient Greeks called Philadelphia.

What you will find in modern-day Amman, capital of the Hashemite Kingdom of Jordan, are Lego-like limestone dwellings, from which its nickname – the White City – springs. These predominantly impoverished neighborhoods tumble down from the city’s seven jebels (Arabic for “hills”) into Biblical-era archaeological sites like the well-preserved and still acoustically astounding Greco-Roman amphitheater.

You’ll also come across camels, wild and free, grazing along the side of the highway. Humble merchants, selling presumably fresh produce in the breakdown lane. They stack white cardboard boxes of hand-picked fruits and vegetables on flimsy wooden stands and sit on unstable fold-up chairs behind their broken down mini-vans and pickup trucks, waiting interminably for someone – anyone – to stop and shop.

Astonishingly, you’ll also find those annoyingly ubiquitous selfie sticks, but to your immense surprise, it’s not the English-speaking tourists toting them around. It’s the Jordanian school children you encounter at the impressive ruins of Jerash, a 30-minute drive north of Amman.

“What is your name? Where are you from?” these fresh-faced innocents ask you with joyful, youthful curiosity in heavily accented yet proficient English.

“America?!” they repeat when you answer them. “We LOVE America!”

And you have no reason to doubt them, judging by their penchant for portrait picture-taking and stylish Western clothing. They hop up and down and shout over each other to get your attention and pepper you with more questions to practice their language skills.

You apologize for your limited Arabic knowledge, but their faces light up when you say, “Is’salaam alaykum” (“Peace be upon you.”).

“Will you take picture with us?” they plead. Their smiles are bright and their laughter infectious. Your heart melts. Of course, you will.

The sheep here are docile and friendly, as well. They occupy the slopes of Jerash, approaching human strangers and encouraging us to pet their woolen heads.

You dress conservatively, in an effort to be respectful of the local culture: green polo shirt, your favorite hue, which also happens to be one of Islam’s most important colors, and khaki pants. Your attempt to blend in, however, while appreciated, is unnecessary.

“You can wear whatever you want. This is not Saudi Arabia,” our local tour guide, Mo, encourages us.

Mo laughs at his own punch line, and you join him. He’s a native who speaks sophisticated British English. That Jordanians apparently hold Israelis, against whom they have fought fairly recent wars, in higher esteem than the infuriatingly strict Saudis is a welcome revelation.

Back in Amman, as you prepare to leave the strategically convenient Citadel complex, with views of all seven jebels, it is just after 5 p.m. The latest calls to prayer echo loudly from numerous minarets that protrude from the hills’ highest points. You can’t help but be transfixed by their hypnotic beauty.

Yet, none of the Muslim tourists walking alongside you rush to their knees to face Mecca. They might be faithful adherents to their religion, but they aren’t fanatical about it. At least not in public.

Some of the older, and even younger women cover up at least partially, in observance of their conventional Muslim practices, though many others proudly wear makeup, jewelry, and jeans.

Today’s Jordan, it turns out, is a determinedly progressive Muslim state. Its capital, both urban and urbane.

“What is the population of Jordan?” Mo quizzes us.

When someone responds, “Nine and a half million,” Mo edifies us, “Yes, but that is just the Jordanians. What about the refugees? There are at least two million of them.”

Jordan, he points out, welcomes the countless masses of humanity that are fleeing war-stricken neighboring countries like Syria, as well as those who flock here from peaceful homelands.

“We have a large expat community in Jordan,” Mo adds. “Many Egyptians and other foreigners.”

At a traffic light in congested Amman, we come to a stop. Mo, in mid-sentence, interrupts himself.

“Oh, look. The school bus in front of us. You see, the little girls?”

They’ve spontaneously left their seats to perform a jubilant dance in the aisle.

Yes, in Amman, you find many things, some of which you expect and some you don’t, including an abundance of love.

A genuine love. An exuberant love. A sisterly, and most certainly a brotherly…

And that’s when it hits you.

A culture, a country, a city built and based on such love?

How appropriate, for a place once known as Philadelphia.

Author Bio: Erik Scalavino is an artist, writer, Patriots Journalist, and traveler. Follow him on Twitter under @E_Scal, and check out the organization he founded called Nutmeg Animals.

Previous Posts Same Same but Different Scandals: How to Talk Politics Overseas
Next Posts Accessible Travel: City Touring Challenges and How to Overcome Them