When in Rome, Pour a New Brew 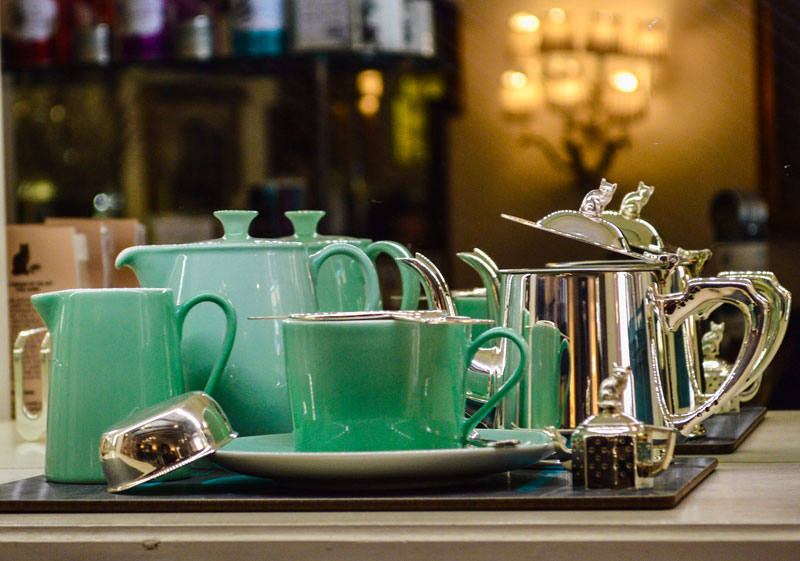 Most visitors to Rome are eager to dine and drink like an Italian, but if you need a break from the plates of carbonara and cups of cappuccino during your Roman holiday, head to Babington’s, an establishment steeped in the British tradition of tea, located at the foot of the Spanish Steps.

I know what you’re thinking. Tea would be lovely in London, but doesn’t coffee reign in Rome?

While it’s true that you’d have to forgo a robust Italian espresso at one of Rome’s trendy coffee bars for a visit to a classic British tea room for a cup of delicately brewed tea leaves, you won’t find a more delightful place than Babington’s for cake and crumpets.

And who knows? It might turn out to be just your cup of tea.

My journey from the opposite side of Rome where I was staying with a tour group, to find the Spanish Steps was a little confusing, even with a map and GPS to guide me. When I asked for directions from my fellow travelers before I set out on my cross-town walk, they told me to just follow the crowds and they’ll lead me to the steps.

I found it hard to believe that every tourist I encountered would be heading to the Spanish Steps, but after a trek across busy intersections and through narrow alleyways, when I finally caught sight of the steps, I had to admit they might have been right.

It took me awhile to zigzag through the crowds of people sprawled on the landings, basking in the sun, taking photos and jogging up and down the famous 135 steps.

I sat down on the steps to rest my aching feet and think about a place to grab a bite to eat. There’s no eating on the steps since Roman regulations nix noshing and nibbling at the city’s monuments, but I spotted Babington’s Tea Room door standing ajar at the foot of the steps.

They’ve been at this prime location, serving tea for 124 years. Back in the 1890s, two ladies arrived in Rome determined to make a living by opening a cafe where the English community could have a spot of tea and read the newspaper. It soon became a place where travelers who were tired of sight-seeing could refresh themselves with a taste of home.

Surviving two world wars, the ups and downs of business throughout the years and travelers’ changing tastes, Babington’s tea kettles keep on whistling. Today, the tea rooms are run by two great-grandchildren of one of the original owners and offer traditional breakfast selections, sandwiches and salads, along with the sweets and scones.

I made my way across the steps, wondering how long the wait was but surprisingly got seated immediately, even without a reservation during the busy lunch rush. The charming dining room has light fixtures in the shape of British crowns hanging from the ceiling and elegant ladies wearing Victorian dresses arrive to take your order.

I wanted to try a tray of assorted tea sandwiches, hot Scottish scones with strawberry jam and whipped cream, and of course, tea. The tea selection was a bit dizzying with a variety of teas from around the world, including seven unique teas of Rome.

There was a Michelangelo blend, honoring the scents and colors of the Sistine Chapel with shades of mint and blueberries; a blend called Arrivederci Roma that was a citrus blend of white teas to celebrate the Trevi Fountain and a visitor’s desire to return to Rome one day; and a blend of black teas with notes of roses and vanilla as a tribute to the Piazza di Spagna, celebrating Babington’s location since 1893.

I had a hard time deciding on a tea selection so I asked my server for a recommendation, and she confidently said she’d choose something refreshing for me. She brought me Babington’s exclusive White Passion blend with pear, peach and exotic fruit. It was light and fruity and just what I needed to fortify me for the long walk back from the Spanish Steps to rejoin my tour group.

I’m not sure I’d always be willing to give up an Italian coffee for a cup of tea, but a change of pace from typical Roman fare was just what I needed to whet my appetite for dinner.

I spent that evening dining at a traditional trattoria where I relished another plate of delizioso pasta and drank a frothy cappuccino, which I happened to grow even fonder of during their very brief, midday absence from my Rome culinary itinerary.