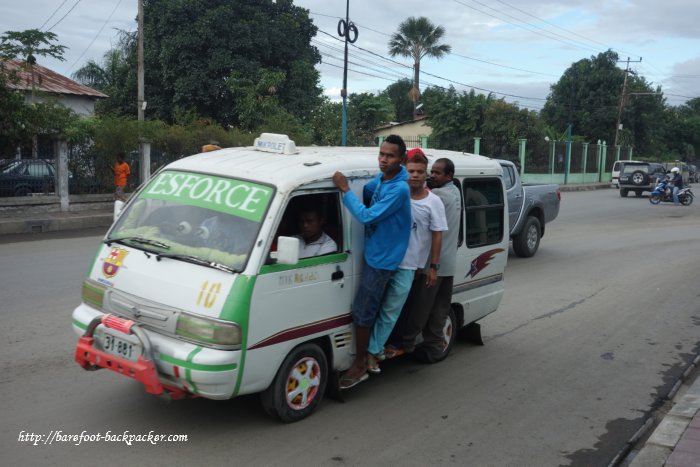 In light of this week’s topic of Transportation on #CultureTrav, we’re featuring a post by Ian Oliver of Barefoot Backpacker. Thanks for sharing, Ian!

Ian Oliver, the Barefoot Backpacker, is a solo traveler originally from the United Kingdom. Usually traveling as light as possible, he enjoys exploring dark history, among other things. In this guest post, he compares city and regional transportation in three different places around the world.

Read about Ian’s experiences, and be sure to join us at 2:30 p.m. ET on Thursday, April 30 for #CultureTrav.

By Ian Oliver of Barefoot Backpacker

Outside my house, a small orange-red minibus runs every half an hour, taking a number of people either to Derby or Mansfield (neither place being high on any backpacker’s UK itinerary). On the rare occasion it’s full, it holds around 35 people, which only tends to happen around lunchtime. At the front of the bus, just behind the driver, is a small area for luggage, although the legroom in the seats is such that you normally wouldn’t need to use it except for heavy or bulky items. Although sometimes late, it runs to a fixed and generally accurate timetable that is widely published and even available at many of the easily-identified bus stops. Issues and delays of service are Tweeted by the bus company when necessary. It’s a serene affair; no music, no TV and only the chatter of passengers and the occasional banter with the driver rouses you from the mundane journey.

Each minibus on the route is branded the same, and while other routes have different coloured buses, the overall company brand is consistent; quirky but uniform – very much a corporate-led environment. The routes are fixed and route maps are clearly available inside every bus, while full network maps can easily be picked up online or in travel shops. Typically British, one might say.

And completely the opposite of Dili, capital of Timor-Leste.

Dili has four types of vehicles ploughing its dusty, broken roads: yellow taxis, big trucks, motorbikes, and small vans acting as minibuses. These are called ‘microlets’ and are easily identifiable, not least when they come hurtling around the corner and there are usually three or four people hanging from the door. Allegedly, they seat about 10 people, but as is often the case across the world, their capacity is determined more by the willingness of people to ‘snuggle’ than the physical number of seats. Given the temperature rarely drops below 30 C, and with tropical levels of humidity, this is perhaps not the best way to get ‘close’ to the locals…

They’re also not designed for tall Western backpackers – there’s virtually nowhere to put luggage, and even with a “carry-on” backpack, my legs were squashed into unnatural positions. In addition, I didn’t have much headroom when stepping out.

Catching a microlet is easy, in principle – you simply stand by the side of the road and wave your hand when you see one coming. There are no apparent designated ‘bus stops,’ although the locals do tend to ‘clump’ together in various areas. In addition, there are no schedules; if you wait long enough, one will come. By ‘long enough,’ in the middle of the day this appears to be about every 30 seconds…

The only snag is making sure you catch the right one. There are designated ‘routes,’ each with a number assigned (the highest I saw was ‘10’). Although Dili isn’t the largest or most complicated city in the world, there are no route maps, nor destination boards (not that any of that would matter anyway as Dili has no street signs), and the only way of catching the right bus is to either ask or remember which route number you’ve seen before and trace it back.

As for the microlets themselves … each one looks privately owned, with absolutely no conformity amongst them. They are uniquely decorated in a myriad of colours and posters/banners depending on the whim of the driver and his mate (invariably late teen/early 20s men with clothes as vibrant as the microlet itself); many of them are shrines to football teams – reflecting the Portuguese heritage, these tend to be Brazil, Portugal herself or Benfica; some others are dedicated to women, either famous models with their picture lain on the dashboard or simply the driver’s girlfriend, whilst many are just completely randomly decorated in striking patterns, colours and designs (I’ve even seen one with the British flag on it). Regardless, most of them have a built-in sound system, of course set to ‘11,’ pumping out samba or reggae.

They also only cost 25 cents to ride, as I discovered when I took one back to the hostel after taking a walk all the way up to the Timor Plaza shopping centre and thinking ‘I’m sure I’ve seen the ‘10’ go past the hostel.’ The locals were rather surprised to see me catch them, as the yellow taxis are only a couple of dollars per mile anyway.

The marshrutkas of the ex-Soviet world are a kind of halfway house – a more ‘organised’ sort of chaos.

Seating more like 16, these ply the grey, concrete-lined streets of countries like Moldova and Kyrgyzstan alongside longer, more typical buses, some of which in Moldova looked like they were rejects from other ex-Soviet states … during Soviet times. They’re slightly more expensive – in Bishkek, 10som as opposed to 8som, but bear in mind at the time I visited, there were 87 to the British Pound – and you pay the driver not immediately on entry but once you’ve been picked up and are speeding away, often by handing your money to other passengers who pass it down the bus. Simply put, they’re a minivan with seats inside, no apparent windows that can be opened (although one I rode on in Bishkek had its emergency exit sunroof wedged open with an empty lemonade bottle) and very ‘dodgy’ suspension, driven (almost exclusively) by men who make London taxi drivers seem like 65-year-old grannies in comparison.

One example (bear in mind they drive on the right in Kyrgyzstan). At one intersection, we wanted to turn left; we were in the far right lane. As we tried to turn left, another marshrutka came up alongside us on our left and wouldn’t let us cross his path. Two-thirds of the way across the intersection, we managed to edge in front and turn, at which point the other marshrutka finally indicated he was turning left, as well. I had rather too good a view of this incident…

As in Timor-Leste, you can hail and stop them from virtually anywhere en-route, although they do appear to have designated bus stops. Each one has a specific route, which is often (though not always) displayed at the front next to the driver, which does make it hard to see. In Bishkek at least, there is a very detailed website that displays every single one of them on an interactive map. In principle this makes the city much more navigable than most other world capitals. There appear to be hundreds of routes there, so you can get between most places in the city using marshrutkas – except the road the Afghan embassy is on, as that’s an uneven, gravelly, half-finished, one-way street…

They are also pretty regular; in principle there’s a timetable or frequency but again it’s often a case that if you stand on a street corner, the one you want will pass every few minutes, although on main roads you’ll often find several (hundred) that are going to your destination, so waiting times are in the order of nanoseconds. Unlike Timor-Leste, they’re usually pretty plain in colour (white is particularly popular). The lack of decoration is made up for by the ear-splitting stereo, playing either Russian-language electro-dance (Transnistria) or cheesy 80s soft rock (Bishkek).

This sort of transport probably wouldn’t work in the UK – we like structure far too much.