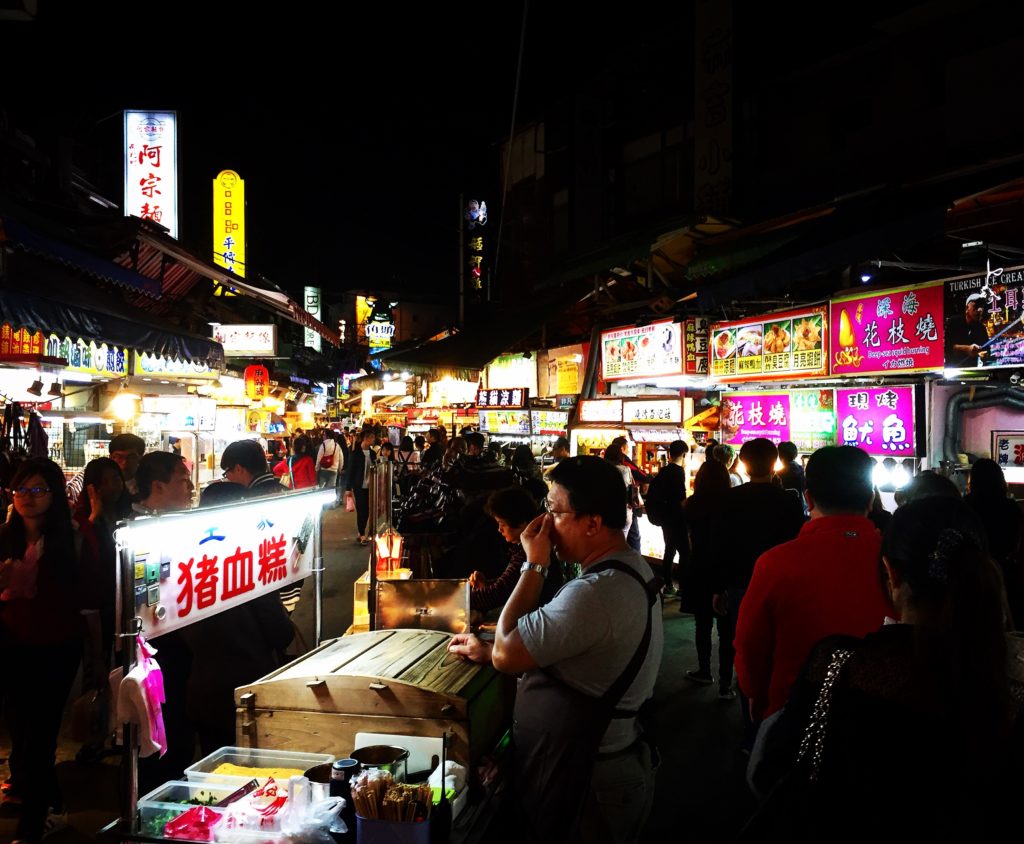 Today’s guest post is by Lauren Siegel, Asia Correspondent for Culture with Travel.

The Night Markets are renowned in Taiwan, and are some of the best in the world. Centered around such staples as xiao long bao, caramelized tomatoes and strawberries, fried chicken, oyster omelette and noodles galore. They’re all authentic, cheap and as delicious as you’d find in any five-star restaurant.

Aside from one thing: stinky tofu.

The first time I smelled it, I thought something had gone wrong like a sewer system failure or an exploding pipe. I’d describe it as a mix of wet feet with a rotten egg mixed with a diaper. Actually, it probably smelled worse than that.

It wasn’t until a friend was visiting and the smell appeared yet again at a different night market in Taipei and my friend confirmed it as stinky tofu. I quickly protested that there was no way any food could smell that terrible, let alone that people would pay money to eat it. My friend told me that not only was this the case, but people in Asia loved it.

In contrast, I’ve talked to Westerners living in Taipei that have tried it and thrown up shortly after. Not very reassuring. I’d say it’s definitely an acquired taste, especially given that information.

I started asking local Taiwanese friends about stinky tofu, and they confirmed my fears: they loved it. They’d even said that after discussing it they were now in the mood to eat it. They weren’t going to get my company on that quest.

In retrospect, I think it can be attributed to stinky tofu being sort of a “comfort food” in the region. You grow up with it being cooked in your family kitchen, and the smell (especially because it’s so pungent) becomes familiar and associated with happy memories. We all have certain foods like that. Whenever I smell a lot of garlic it takes me right back to my grandmother’s kitchen when I used to watch her making Sunday gravy. I guess there are a number of people who don’t like the smell of garlic either, but to me it just reminds me of the love that my grandmother put into her cooking. Perhaps this feeling is what a lot of Taiwanese are recalling when they smell stinky tofu.

At least now that I’ve identified it, I can be prepared every time I visit any sort of market in Taiwan. Stinky tofu is everywhere here. It’s prepared at small stalls, and I’d venture to guess that the neighbors of the stinky tofu stalls can’t be too happy about their location.

So, what exactly is Stinky Tofu?

Fermented bean curd. It’s usually served as cubes on a plate. It can be stewed, steamed or raw but the most common preparation in Taiwan is deep-fried and served with pickled vegetables and a spicy sauce. Since cooking something as odorous as this in a restaurant wouldn’t create any sort of ambiance, it’s mostly sold by street vendors and at night markets in Taiwan. It’s also made in China, but for some reason is more widely available/popular in Taiwan.

The stinky tofu vendors also don’t tend to use a lot of signage – the smell is promotion enough. Apparently there is also some competition among the street vendors to see who offers the stinkiest version. It creates a plume of stink in the area surrounding it and the smell lingers. Long after you’ve left the market, you’ll feel like your hair smells like the tofu or your jacket.

It’s said that the stinkier it is, the better and more flavorful. Admittedly, it’s hard for me to even type the word flavorful when it’s referring to stinky tofu. A lot of the stink is said to come from the preparation, and a lot of effort is put into trying to minimize the time between extracting the tofu from the broth it’s prepared in to being served.

After further investigation into this newfound world of stinky tofu, I found out that there are health benefits to it as well. Because it’s soaked in fermented vegetables, a healthy bacteria forms that acts as a probiotic, along with the regular benefits of tofu. So while the jury is still out on whether or not I’ll try stinky tofu before I leave Taiwan (or at any point in the future), I suppose it’s good to know that there are some redeeming qualities.

Have you tried stinky tofu? What’s your stand on it? Let me know in the comments below!

Previous Posts Accessible Travel: City Touring Challenges and How to Overcome Them
Next Posts Why Pick France For Your Next Vacation