Paris: A Moveable Feast of Kindness 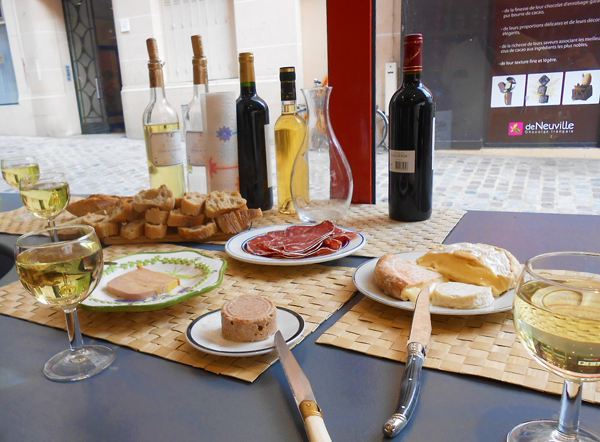 Today’s guest post is by Valerie Sisco of the blog Grace with Silk, and our new Culture With Travel Food Correspondent.

Artisan cheese and French wine, coffee at a sidewalk cafe, chocolate croissants and fresh-baked bread. Even foie gras. I was looking forward to the food tour through the Latin Quarter that I’d booked months before I left on my trip to Paris.

But, I almost missed it.

The morning of the tour was just my second day in Paris and I was completely jet lagged. I overslept and on my way out of the hotel, I grabbed the directions for the tour meeting place from my travel notebook that I’d meticulously printed out at home. But I also hurriedly asked the hotel concierge for directions too, just to be sure.

It wasn’t long before I got confused since the concierge’s directions and my printed instructions didn’t seem to match. I wandered for blocks and started to panic since I knew I wasn’t going to meet the tour in time. A shop owner noticed me standing in front of the door he was just unlocking and asked if I needed help. He offered to call the tour guide’s number listed on my confirmation, but there was no answer.

Even if I could have found my way, it was now too late to meet the group, so I decided to head to the closest cafe for breakfast.

As I stood on the street deciding which way to go, a student asked me in halting English if I needed help. I gave him the address of my hotel and he offered to walk me there. As we walked, he told me he had come to Paris from Algeria and was studying English to someday move to the U.S. He said he planned to try his luck at being a waiter while he worked on making his dreams come true.

I offered to buy him breakfast for accompanying me, but he refused and made sure I knew where I was going before he left me.

Back at the hotel, I realized I’d confused the ending and starting points of the food tour. In my haste, I’d grabbed the page with the directions back to the hotel from the tour’s conclusion but asked the concierge for directions to the meeting place.

No wonder the directions hadn’t made sense.

The concierge asked me what I was doing back so soon and I told her although the mistake was my fault, I was so disappointed to miss the prepaid tour. She offered to call the tour guide and see what she could do.

I stood by listening to a stream of French words that grew louder and more heated. I was embarrassed and tried to motion to her to forget it but she kept right on talking.

Finally she hung up. “She’ll let you join Friday’s tour,” she said calmly.

I was stunned. She shrugged, “She was upset she held the tour waiting for you, but now she is okay.”

When Friday arrived, I made sure I was there early to express my gratitude. The tour guide brushed off my apologies and said it was no problem but I still hoped she wouldn’t hold it against me.

Our first stop was the Eric Kayser bakery where the guide bought a bag of assorted pastries and passed them around to us. I was lucky to get a chocolate croissant and a choux pastry ball filled with vanilla Bourbon cream. Both were scrumptious.

She led us through the streets of the Latin Quarter, to a specialty cheese shop, a charcuterie, and a gourmet vinegar store. She showed us Ernest Hemingway’s apartment and took us into a gated private courtyard she said belonged to a friend of hers.

As I stood in the tiny garden surrounded by Paris apartments, watching two French felines jump out of one of the open windows, I relished seeing this slice of Parisian life.

The tour ended at a wine store that had a window counter filled with plates of food from the shops we’d just visited. Wine was poured in our glasses, and as I sat down for my first taste of foie gras spread on a French baguette, I thought about how I’d almost missed this treasured experience if it weren’t for helpful Parisians I met along the way.

Before I visited Paris, I’d always heard that the French could be brusque, even downright rude, especially to Americans. But now I know that those reports may happen to be greatly exaggerated because I encountered a genuine movable feast of French kindness.