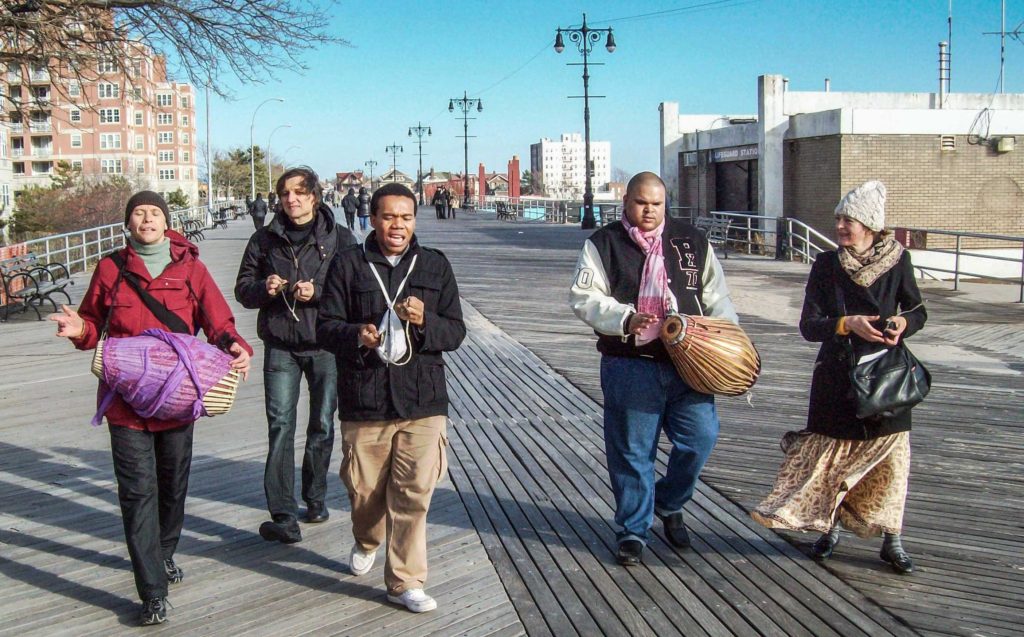 There are 20 Q train stops in Brooklyn. The journey takes about 40 minutes and winds through neighborhoods including Fort Greene, Park Slope, Flatbush, Midwood, Sheepshead Bay and Brighton Beach before terminating in Coney Island. Although Coney Island may be the most famous attraction along the Q train in Brooklyn, there are at least four other memorable stops along the way.

The name “Brooklyn” is synonymous with pizza, and there are plenty of places both old and new to pick from. For a taste of the new (since 2004), Franny’s is just one block south of the 7 Av station on Flatbush Ave. Their “simple is best, less is more” approach to Italian food has earned them accolades in major publications like the New York Times, Wall Street Journal and GQ among others. In addition to amazing pizza, they have pasta dishes as well as appetizers, all made with 100% renewable energy.

If you continue south on Flatbush Ave., you’ll run into Grand Army Plaza, which is the main entrance of Prospect Park. In addition to the iconic Soldiers’ and Sailors’ Arch, there’s also a JFK monument. Just past the arch is the Brooklyn Central Library with over one million books, magazines and multimedia materials.

There are two “Prospect Park” stops. The F-G line stops on the western corner and the B-Q (and S) line(s) on the eastern corner. From the Q, you can walk around Prospect Park Lake and meet back up with the Q train where you started, or catch it at Parkside Ave., east of Duck Island. Bike and boat rentals are also an option at the LeFrak Center at Lakeside.

Ok, NYC is expensive. Everyone knows that, but $5 for a slice of pizza ($6 for a square)? And in a neighborhood most outsiders have never heard of? Well, DiFara has a typical wait time of at least an hour or two. On a quiet (by NYC standards) block outside the Avenue J stop on the Q line, other pizzerias often sit empty while there’s a constant line out the door at DiFara (including winter time). Fortunately, you can wait inside Fats Café and also eat there since seating inside the pizzeria is limited. Watching Dom DeMarco take his time can make you forget about the hustle and bustle of the city that never sleeps. The only tourists in this area are likely to be found at DiFara, but there are plenty of locals too.

A walk along Brighton Beach Ave. can make you forget you’re in the United States (well, ignore the elevated Q train on which you will likely arrive). Many signs will be in Russian and you may not understand too many conversations going on around you if you don’t speak the language. However, this is an excellent opportunity to familiarize yourself with Russian food, whether you want to shop in a Russian store or sample one of the many restaurants along Brighton Beach Ave. and many of the side streets.

Neighboring Sheepshead Bay is not to be ignored either. This area is home to more than 120,000 residents as has given us comedians like Andrew “Dice” Clay and Larry David as well as sports icons like Vince Lombardi and Lee Mazzilli. Since many people from the former Soviet Union have settled here (like in Brighton Beach), there’s an eclectic mix of restaurants here.  For Tajik food, try Café Dushanbe. When you’re finished, take a stroll across the Ocean Avenue Pedestrian Bridge, where you may see locals fishing in the bay. After you cross, turn in either direction onto Shore Blvd. and admire the multi-million dollar mansions.

Ok, everyone has heard of Coney Island. The D-F-N-Q lines all end here and although more “exciting” amusement parks have been built all over the country in the more than 100 years since the three original iconic parks were built here, Luna Park is still an attraction.

There’s also the beach and boardwalk as well as the New York Aquarium. For baseball fans, the Brooklyn Cyclones have been playing at MCU Park (current name) since 2001 as the New York Mets single-A team.

For foodies, there’s a Grimaldi’s outside the subway (it’s above ground there) station, but it’s not the original and you won’t see a line outside the door. The real gem in this area is Totonno’s Pizzeria Napolitano. They’ve been serving pies in Coney Island for over 90 years and have one of only a handful of coal-fired brick ovens still in use in NYC.