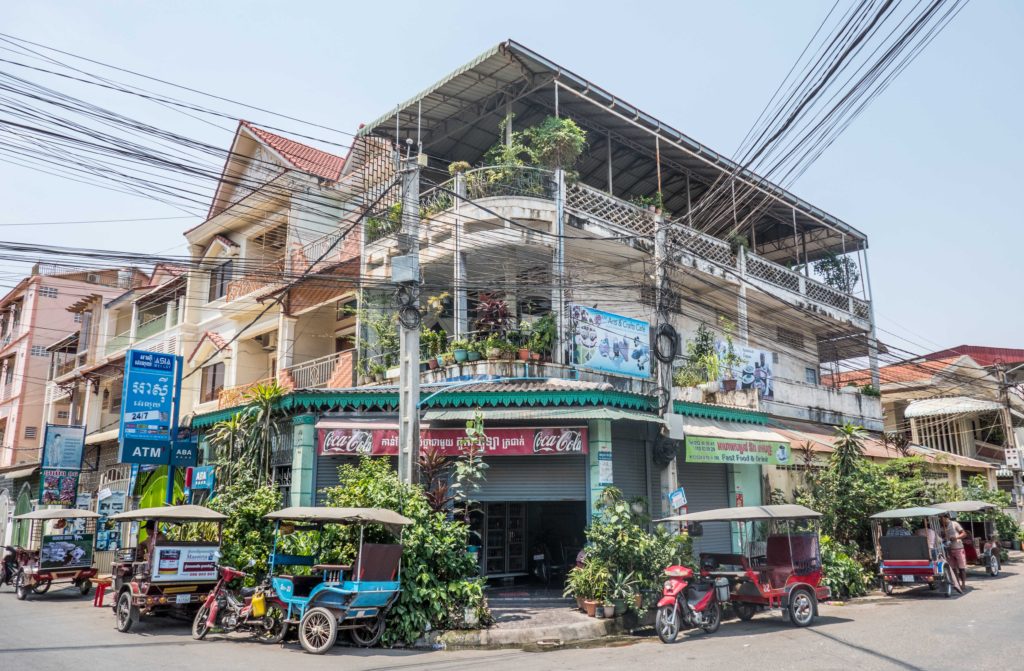 Here are Brian’s takeaways for exploring the local culture in Cambodia.

Although the locals don’t expect tourists to speak Khmer, attempting some basic phrases can make them open up to you. People in Cambodia are generally reserved unless they’re trying to sell you something. A simple johm ree-uhp soo-uh (ជំរាបសួរ – hello), aw gohn (អរគុណ – thank you), etc. will bring a smile to a Khmer face and make whomever you’re speaking with more comfortable practicing their English with you.

2. DON’T SHY AWAY FROM A DARK PAST

Most people don’t go on “vacation” to visit morbid sights and hear about a country’s troubled past. However, to really experience Cambodia and understand where it’s at today, you have to understand its past. Most people over 40 will be familiar with what happened in Cambodia after the United States left Vietnam, but what is now known as Cambodia has a history as complex as any of its’ neighbors. The Khmer Empire once included the former South Vietnam as well as parts of modern-day Laos, and Thailand.

Tuol Sleng Genocide Museum (the former S-21 prison) and Choeung Ek Genocidal Center (The Killing Fields) are the most commercialized sights documenting the horrors which killed more people than currently reside in Manhattan. Both are located around the capital of Phnom Penh and can be visited in a half day, but talking to people that experienced the horrors of the Khmer Rouge can be just as profound as seeing the skulls at Choeung Ek or pictures of pre-teen victims at Tuol Sleng.

Sandwiched between Vietnam and Thailand, Cambodia’s food is not well known internationally. While most small cities in Canada and the United States have at least one Vietnamese and one Thai restaurant, Cambodian food is difficult to find in the food mecca of New York City as well as Washington, D.C. Does that mean it’s not good? No! Go to South Philadelphia if you want Cambodian food on the East Coast.

For more conservative diners, amok is an ideal dish to start with. It’s made with fresh coconut milk as well as kroeung, which is a Khmer curry paste made from lemongrass, turmeric root, garlic, shallots,  galangal and ginger. Unlike a lot of Thai curries, amok (and Cambodian food in general) is not spicy. At the more upscale restaurants, amok will be served in a banana leaf. Although fish amok is the most common version, most menus will offer it with meat as well.

For the more adventurous eaters, there’s Lap Khmer, which is a raw beef salad (think ceviche with meat), with the beef marinated in lime juice. For the most adventurous eaters, few countries can offer as much as Cambodia. Much of the food that scares foreigners will be found at roadside stands. Grilled frog, rat and snake are most common in the west of Cambodia and there are also insects of all sizes available around the country. If you want to try insects in a more formal setting, many restaurants serve red tree ants with beef and holy basil.

Perhaps the most controversial food in Cambodia is “VIP meat.” Tourists coming to Cambodia expecting to see dog on every menu will be disappointed. Like in Korea, it’s been pushed to the fringes. Signs boasting “VIP meat” are the local way of saying “we sell dog meat.” Although anyone is welcome, most of these places are in areas where few tourists will venture to and that’s no accident. It’s pretty much treated like other “vices” in that you have to know where to go or talk to someone who does.

What better way to learn about this cuisine, which is not yet internationally known, than to cook some with the guidance of a Cambodian chef? There are cooking courses available in most countries, but the ones in Cambodia are some of the most affordable in Asia (i.e. no excuses for not going).

Champey Cooking Class in Seam Reap is centrally located and gives you ingredients to take home as well as a certificate of training. Go hungry! You’ll likely make spring rolls for an appetizer, cook fish amok for the entrée and eat fried banana for dessert. If somehow you are still hungry afterwards, there’s pretty much every type of food Cambodia has to offer within a couple blocks of the class. Check out Champey’s YouTube channel for more info.

Tuk tuks are an essential Bangkok experience and the same is true of Cambodia. Although none of their cities are as crowded as Bangkok, tuk tuks are still the most authentic way to get around for short distances. Phnom Penh is said to have more than 6,000 and they are omnipresent in other cities like Siem Reap and Battambang as well.

Check out Brian’s video riding through the city:

6. EXPLORE ON THE BAMBOO TRAIN

If you make it to Battambang, you should ride the bamboo train. It’s uncertain how much longer the bamboo train (ណូរី, – norry in Khmer) will exist and if it’s gone ten years from now, you can say you rode the world’s most uncomfortable train. While you won’t want to do it more than once, it will be a ride you’ll never forget it.