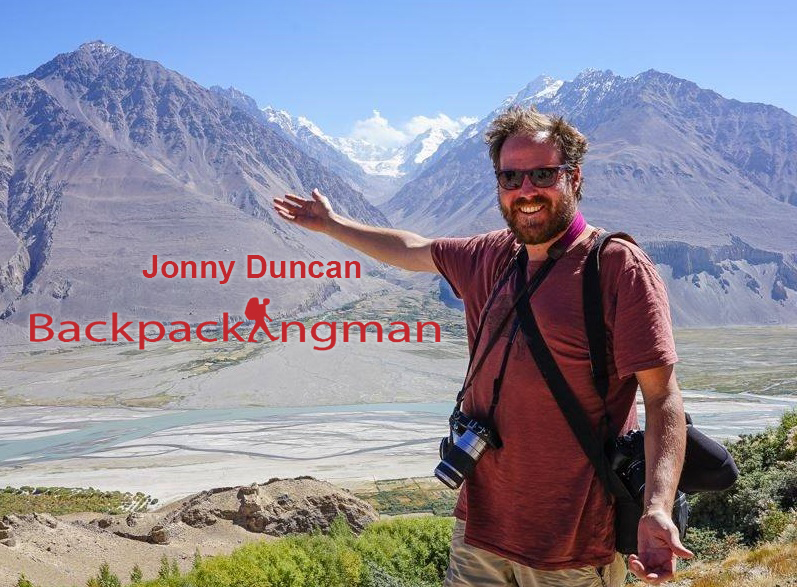 Meet Jonny Duncan, travel addict. He grew up as a child moving around different countries due to his fathers work, and that set the theme for the rest of his life. Now he can’t stay in one place long enough, before getting itchy feet to go and have some adventure in a foreign land.

By the age of twenty, back in 1997, he was ready to go exploring the world by himself, and headed out on his first backpacking trip, which took him to Egypt. After only a few weeks he knew this was the life for him. Working there as a film extra for a while, he realized there was no real reason to go back home. And so ever since he have been traveling the world and living abroad.

His travels have taken him throughout Asia, Africa, The Middle East, Europe, and South America. He live out of his thirty-liter backpack, drifting to wherever the next adventure may be. Why such a small backpack? Well it’s part of a life philosophy. Jonny shares his travel experiences on his blog, backpackingman.com.

Here’s our interview with Jonny Duncan:

Tell us a bit about yourself! Why do you love travel? How do you think travel unites us or teaches us more about the world?
Jonny: I didn’t know what to do with my life when I was 20 years old, so saved up a bit of money and started traveling. 19 years later and I’m still going! Travel has taught me not just about other cultures and places but also more about myself. The more you see the world, the more you know how similar we all are in what we want in life.

Can you tell us something about the culture in your country and why did you decided to stay there?
Jonny: I don’t have a culture in “my” country as I haven’t lived in Britain for 19 years, and don’t think I ever will again as I love to travel. If I find a place I like a lot then I tend to slow down a bit and stay a few months before moving on again. That’s the culture I know.

Which dish do you feel best represents where you’re specifically from? Share a picture and tell us why you love it!
Jonny:  As I am technically British when I go back to visit family, I always look forward to some fish and chips, especially as they live by the sea.

Growing up in your country, what’s something that you believe makes it unlike anywhere else in the world?
Jonny: I grew up in different countries due to my dads work. I am 39 years old, but have only lived 9 years in Britain. I did live in London when I was there as a teenager and it had some of the best clubs in the world!

Talk about the role of family in your life. What does family mean to you? Which family values are valuable to you?
Jonny: My family taught me the value of treating others good and learning from each other, especially due to growing up living in other countries.

How important is spirituality and religion in your daily life? What do you do to celebrate the two?
Jonny: I am an atheist, so religion means nothing to me personally, however I do love seeing how it can make others feel good and I love visiting religious sites in the world, especially Buddhist ones, as I like the general peaceful atmosphere.

Art and dance can tell a deeper story about local culture. Tell us the story of a specific artwork or dance that has a meaning for you. Share a photo, if you can. (It can be anything from street art to a festival to a painting to architecture to woven art work, to woodworking, a family heirloom, etc.)
Jonny: I agree, dance and art can bring us together in a tribal kind of way, whether it’s a techno club in London or a tribal dance in Africa, there is something in us that connects us and the earth as one. All dance has a special meaning to me but I love watching and joining in traditional dances from cultures everywhere, such as this photo in Kyrgyzstan.

Languages not only give us the power to communicate, but also can unite us across cultures. What’s something you love about the multitude of languages spoken in your country? Share a favorite saying you have, or teach us something in your native language.
Jonny: Like I said I don’t really have a country I would call home but I enjoy experiencing all the different languages everywhere and trying to learn some of them. I guess a saying I have with this would be “at least learn to say a few things in another countries language when you visit”.
What local spot in your city/town do you love most? Why is it personally important to you?

Jonny: As mentioned, I have no particular home, but when I visit family in Britain on the islands they live on (normally a few weeks a year) there are a few beaches that I have memories of from a child from when we visited now and then other family members. It means a lot as it is the only thing that ties my childhood to the present. It’s a constant in my life of total travel.