An American Breakfast in Paris 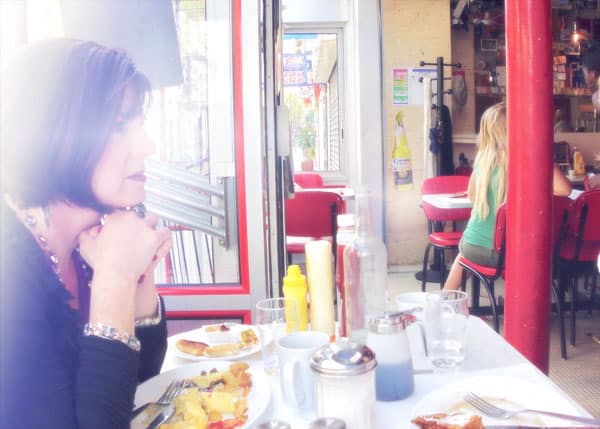 Today’s post is by Valerie Sisco, Culture with Travel Food Correspondent and founder of Grace with Silk

When I first saw the book Pancakes in Paris (published last year), the story of American Craig Carlson, who opened a breakfast diner in Paris, I was eager to read it since I remembered eating in a similar diner when I visited Paris four years ago.

Then I took a closer look at the photo of the Breakfast in America diner on the book’s cover and realized it was the same place in Paris where I’d stopped one morning for breakfast.

And I’d stumbled upon it unintentionally.

One evening while walking back to my Paris hotel on Rue des Ecoles, I passed the retro-looking diner and stopped to read the menu posted outside.

The diner served eggs and bacon and honest-to-goodness omelettes with cheese and veggies and they all came with potatoes and choice of toast. Of course there were pancakes, too. And not a croissant in sight.

But most enticing of all was the coffee. The menu phrased it in these beautiful words that warmed my heart: bottomless mug o’ joe. All I knew as I walked back to my hotel was that I could hardly wait for breakfast.

Even though I wanted to immerse myself in the Parisian way of life and experience different foods for the week I was there, I still missed my grande-sized coffee in the morning. And an egg and bacon instead of a petite croissant might just be the little taste of America I was craving from the other side of the ocean.

The next morning I headed to the Breakfast in America diner for a home-style breakfast. Living up to its reputation as a diner, the place was comfortable and cheerful with red booths and the familiar aroma of the breakfast griddle.

The wait staff spoke perfect English and carried around pots of steaming coffee, just like they did at home. My coffee mug was filled and refilled, and I ordered an omelette that arrived deliciously cheesy and buttery.

There was one quirk, though. I wasn’t sure why there were toasters at every table until my English muffin arrived beside my omelette, plain and untoasted. When I asked the server if I could get it toasted, she pointed to the toaster on the windowsill and told me to feel free to use it.

Ever since my trip to Paris I’ve wondered about the self-toasting practice. Was it to give the wait-staff a break with one less thing to do? Was it so diners could participate in the preparation of their own meals? Carlson’s book finally explained it.

While he was creating his vision for his own restaurant, he visited various diners across the country and contemplated how he could bring a unique twist to his own eatery. A now-extinct coffee shop in Los Angeles gave him the idea for the individual toasters, so he decided to adopt this quirky feature for his own diner.

Carlson’s book is a funny and entertaining read for foodies, travelers, and all of us who’ve ever dreamed of one day packing up, leaving it all behind and moving to Paris. Leaving a job as a struggling screenwriter, he overcame difficulties and challenges to show France there was more to American cuisine than fast food. With determination, some key investors and a few lucky breaks, he turned his dream into a successful business and now has three Breakfast in America locations in Paris.

But more than chronicling how an American opened a restaurant in Paris, Carlson also writes about what captivates him about the culture and the city as he describes his favorite view of Notre Dame as he approaches it from across the river.

“With its majestic spires reaching toward the heavens — in sharp contrast with its flying buttresses keeping the heavy stone walls from collapsing to the ground —Notre Dame always reminds me of that mysterious interplay between heaven and earth, between the seen and the unseen.”

This is what inspires him and keeps him in Paris. Along with a traditional breakfast of pancakes and eggs and coffee that reminds him of home.

[Have you ever been to Paris? Where was your favorite stop to eat while there? Share a story in the comments!]