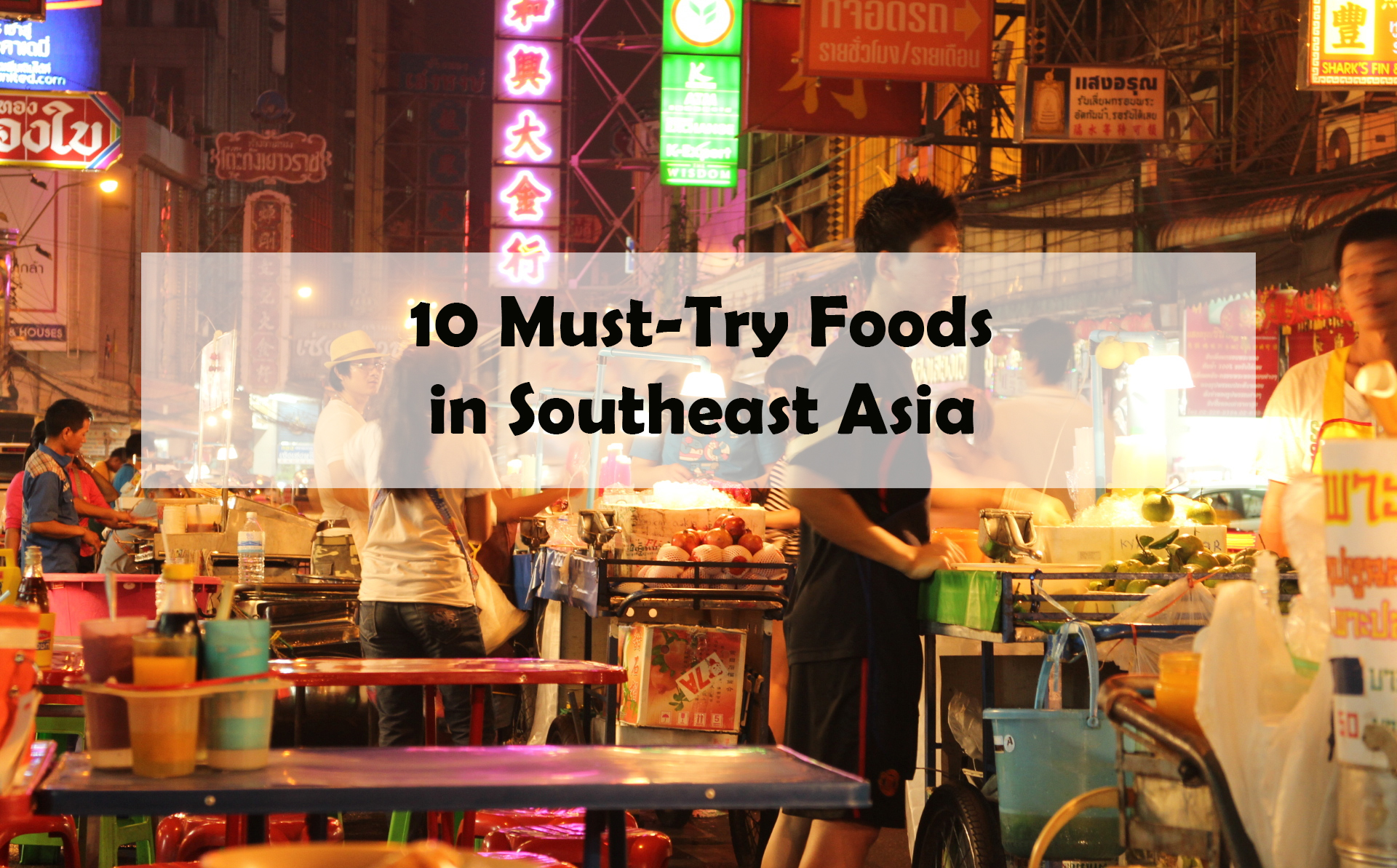 Aside from tourist attractions, the people, the incredible landscapes and learning the culture, food is one of the major things we shouldn’t miss when traveling. Every country has its own specialities, and every region has its differences, especially in Southeast Asia.

Here are the 10 Must-Try Foods:

It means “cut rice” in Thai, although it is possible that it is simply a corruption of the Burmese word for noodles, which is just “khao swè” which may account for the variations. Traditionally, the dough for the rice noodles is spread out on a cloth stretched over boiling water. After steaming the large sheet noodle it is then rolled and cut with scissors. Lao khao soi is still made with traditional noodles. In some markets in Luang Namtha and Muang Sing, you can still see the vendors cutting the noodles. These traditional cut noodles can also be found in several places in northern Thailand.

A Vietnamese term for all kinds of bread. The word is derived from bánh (bread) and mì (wheat, also spelled mỳ in northern Vietnam). Bread, or more specifically the baguette, was introduced by the French during its colonial period. The bread most commonly found in Vietnam is a single-serving baguette, which is usually more airy than its Western counterpart, with a thinner crust.

The term bánh mì is also sometimes used as a synecdoche for a “Vietnamese sandwich”.

Laksa is a popular spicy noodle soup in the Peranakan cuisine, which is a combination of Chinese and Malay cuisine. Laksa consists of rice noodles or rice vermicelli with chicken, prawn or fish, served in spicy soup; either based on rich and spicy curry coconut milk, or based on sour asam (tamarind or gelugur).

In South-East Asian cuisine, “mok”, “amok” or “ho mok” refers to the process of steam-cooking a curry in banana leaves, or to the resulting dish. Thick coconut cream and galangal are classic ingredients, added to a wide range of possible kinds of leaves and staple ingredients. Amok is a major national culinary tradition in Cambodia, and also popular in Laos and Thailand. The Thai version uses the same Thai curry paste as red curry. Amok is thick soup cooked with fish, meat, vegetables,eggs and coconut milk. It is a common dish served at restaurants. The most common types of amok are made with fish, beef, or chicken as the main proteins. Amok can also be eaten with rice.

Mohinga is a rice noodle and fish soup from Myanmar and is an essential part of Burmese cuisine. It is considered by many to be the national dish of Myanmar. It is readily available in most parts of the country. In major cities, street hawkers and roadside stalls sell dozens of dishes of mohinga to the locals and passers-by. Usually eaten for breakfast, today the dish is being consumed more and more throughout the day.

A traditional fruit and vegetable salad dish commonly found in Indonesia, Malaysia and Singapore. The term “Rojak” is Malay for mixture.

Nasi goreng has been called the national dish of Indonesia, though there are many other contenders. It can be enjoyed in simple versions from a tin plate at a roadside food stall, eaten on porcelain in restaurants, or collected from the buffet tables of Jakarta dinner parties.

Green papaya salad is a spicy salad made from shredded unripe papaya. It is of Laos origin but it is also eaten throughout Southeast Asia. In Laos, green papaya salad is one of the traditional staples of the Lao. Pounded salads in Laos all fall under the parent category of tam som, which may or may not contain green papaya, however, when no specific type of tam som is mentioned, it is generally understood to refer to green papaya salad. For absolute clarity, however, the name tam maak hoong may be used, since this name means “pounded papaya”.

Chicken Adobo is an authentic Filipino dish and is one of the mostly recognized Filipino foods. This Chicken Adobo Recipe is the simplest that you can get. Not to be mistaken with Mexican adobo, this dish is uniquely prepared by stewing chicken in vinegar and soy sauce.

Pinakbet (also called pakbet or pinak bet) is an indigenous Filipino dish from the northern regions of the Philippines. Pinakbet is made from mixed vegetables steamed in fish or shrimp sauce. The word is the contracted form of the Ilokano word pinakebbet, meaning “shrunk” or “shriveled”.The original Ilocano pinakbet uses bagoong, of fermented monamon or other fish, for seasoning sauce, while further south, bagoong alamang is used. The dish usually includes bitter melon (ampalaya). Other vegetables used include eggplant, tomato, okra, string beans, chili peppers, parda, winged beans, and others. Root crops and some beans like camote, patani, kadios are also optionally added. The young pod of marunggay is also added. It is usually spiced with ginger, onions, or garlic. A Tagalog version usually includes calabaza (kalabasa). Most of these vegetables are easily accessible and are grown in backyards and gardens of most Ilocano households. As its name suggests, it is usually cooked until almost dry and shriveled; in Tagalog version, the flavors of the vegetables are accentuated with shrimp paste. In some cases, lechon, chicharon, or other meats (most commonly pork) are added.

These are all mouth-watering, right? So are you hungry now? 🙂 Well, if you haven’t tried one of these yet, I suggest adding it to your list. Did you enjoy these 10 Must Try Foods in Southeast Asia?

Let us know, and if you want to find out more travel stories, visit culturetrav.co.

Previous Posts Homemade Dumplings Made Easy: 3 Recipes
Next Posts Moving to the UK: Tips for Immersion