How To Deal With Language Barriers While Traveling 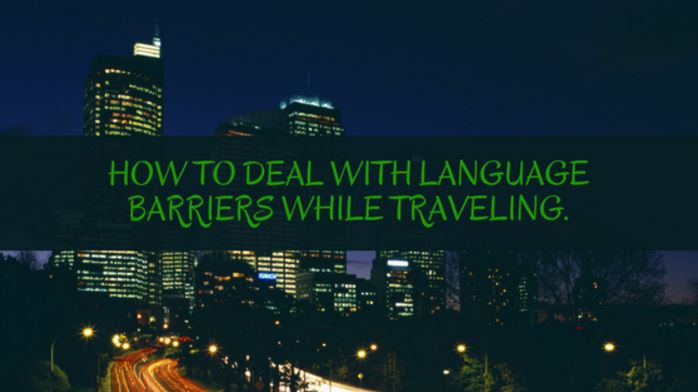 They say that comic relief is the best thing to help a stressful situation; well either that or wine, and they are correct. At least that was the case when I visited Europe. It was a comedy of errors and screw-ups.

I was so nervous to visit Europe – I mean really nervous. Mainly for three reasons: 1. I was going solo 2. I was planning the trip right when the Paris terror attacks happened 3. And I was afraid of language barriers. I had nightmares every night for about a month leading up to the trip, and mentally I was a hot mess.

To help prepare for the two-week trip, I extensively researched each city I was going to visit. To ease into the trip, I decided that flying into an English speaking city — London — was my best bet. From there, I ignorantly figured that Amsterdam was the next best place to visit because so many people online said “everyone speaks English there.” Not, from my experience.

Not only did everyone not speak English, but also I got off that plane and nothing was in English. This is understandable considering it is a Dutch country, but the frustrating part was that I couldn’t find one person that spoke English who could help me. The nightmares I had leading up to the trip started swirling my head because of course my brain was being dramatic. I was literally walking around the Amsterdam airport, holding in tears, and walking from person to person asking if they spoke English. Looking back, it’s so hilarious and silly that I was so nervous. I eventually figured out where I needed to be and the rest of the Amsterdam visit was a breeze.

A couple days later, I took the train into Paris. I wasn’t as worried about the language barrier because I figured that after my mini panic attack in Amsterdam, nothing else could go wrong. Wrong again. I got to the train station in Paris, and while walking through the turnstile doors to get to the subway platform, the doors closed on my luggage; heavy, plastic doors, with a loud alarm, completely locked on my luggage. Of course, this happened in front of about fifty people. So, I was using all my strength to try to get the doors open and these four French guys saw me struggling and started laughing at me. LAUGHING. In between fits of laughter, they spoke in French, but I’m pretty sure I could hear the term “stupid American” a couple times. I’ve never been so embarrassed in my life. I laughed along with them, because it was either laugh or die of humiliation, and then I signaled them for help. The four of them were able to pull the doors off my bag, and I was able to get through.

Next I went to Rome, where a homeless person tried to steal my phone. Luckily, I had headphones on and they kept him from snatching it. By then, I was so jaded and prepared for traumatic situations that I just laughed it off.

Even though the trip was a comedy of errors, it taught me a lot about how to handle language barriers while traveling. I figure I can share them and they may be of help to you.

These are some of the ways you can deal with language barriers while traveling to a foreign country:

Realize that stuff will go wrong and plan ahead

Unfortunately, you can’t control everything that is going to happen. Sometimes things will go wrong. Knowing this, and not freaking out when something goes wrong, can help alleviate the situation. Go With The Flow. I learned to just expect that there would be a couple hiccups in the trip so that when they happened, I was able to just relax.

This is one of the most important tips. Being prepared and giving yourself additional time and tools can help when no one is around who speaks your language. One example of this is giving yourself additional time at the airport or train station. That way you aren’t on a tight schedule when you’re trying to get somewhere or find someone to help you.

I also find it helpful to print out everything I can: maps, boarding passes, directions, hotel information, a picture of my passport, etc. Even though everything can be found online, showing someone a piece of paper with the information you need can be helpful, if you don’t want to give a stranger your phone. It is also good for those occasions when your cell phone doesn’t want to cooperate.

Have a Plan B

Always, always, always have a plan B. Take extra money on the trip in case you need to book a last-minute flight, train ticket, or even have to switch hotels rooms if something goes wrong.

Be Patient and Be Nice

This should be self-explanatory and automatic, but it isn’t for everyone. I live in a touristy city. I can’t even tell you how many people I have dealt with who get mad at me because I can’t understand them. If you are rude, you probably won’t get assistance. It isn’t anyone’s responsibility to know your language. Manners can get you everywhere and if you are nice, someone will probably take the time to help you.

Let Google Be Your Best Friend

How did people travel before the internet and Google?! Download Google Maps and Google Translate and it will help out so much when you can’t speak the language. Google Translate is extra helpful because it can translate text you type in, say words, and phrases out loud, AND it can translate any sign or written text for you if you hold your phone up to the text. It’s Genius.

Download Other Apps That Will Help With The Language Barriers.

There are thousands of other apps that can help you when you’re in a foreign country so it’s best to download them before your trip. Some useful apps include Rail Planner, the Thayls train app, Converter + to help convert currency, City Mapper, and the Big Bus Tours app.

If you find yourself in a situation where someone can’t help you where you are, don’t be afraid to use social media to help you. There are tons of bloggers, professional travelers, and companies that are willing to help you if you just ask for it.

Looking back at my Europe trip, there were many aspects that were stressful, but I would do it all over, and I plan to. The main thing to remember when you are traveling somewhere with a language barrier is to relax and don’t panic (like I did in Amsterdam). Have fun and go with the flow. That makes the trip easier and more enjoyable.

Author Bio: Drea is a freelance writer, bartender, and professional napper. Although she lives in lovely Las Vegas, you can usually catch her on her couch eating Taco Bell and cuddling with her animals. Check out her blog at ImDrea.com, or follow her on Twitter and Instagram. She also has an awesome Twitter account with fun travel memes and content @ATravelMeme.

Have you ever dealt with language barriers? Tell us a story in the comments!