Getting to Know Icelandic Culture One Soak at a Time 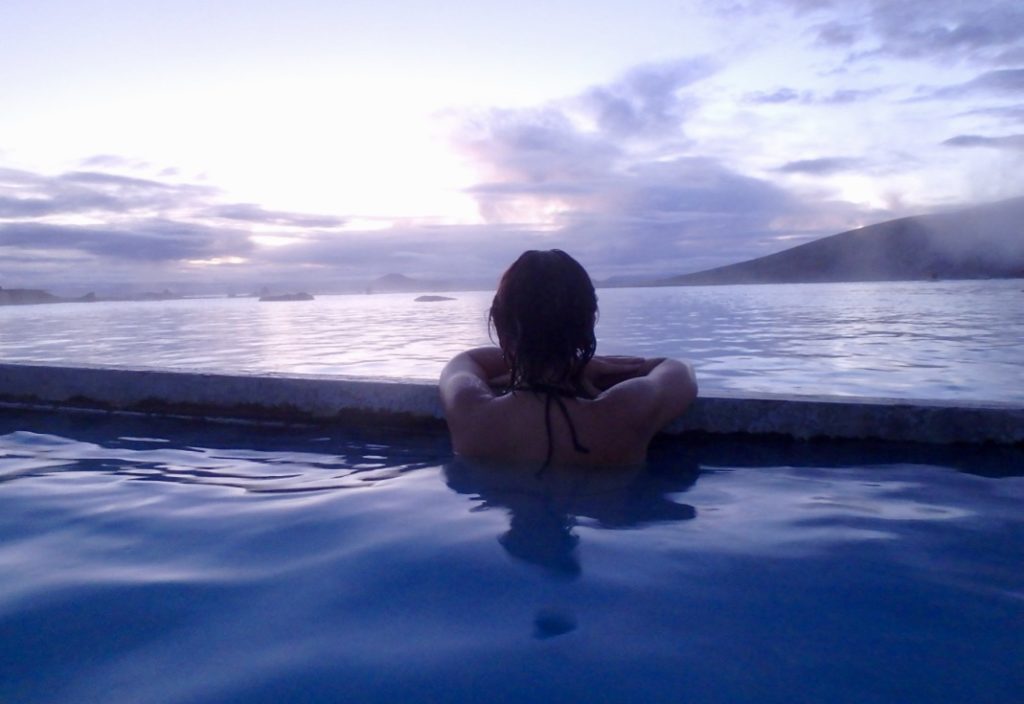 Today’s Culture with Travel post is by Heidi Siefkas

On an impromptu adventure this fall, I packed my bag for two weeks to Iceland. Equipped with the Kindle version of travel tips for the plane ride and a good old-fashioned roadmap for the rental van, I didn’t know much before arriving in Reykjavik. When I say this, I had only mastered one Icelandic word Tak (Thank you).

However, it became clear to me over my stay that no guidebook could teach me what the sundlaugs (public pools) do about Icelandic culture. With a treacherous climate on an island so remote, the nearly three hundred thousand Icelanders have made these conditions bearable by taking a soak.  By tapping into their geo-thermal energy and using it to heat pools, jacuzzis (hot pots), and saunas, nearly every town in Iceland has a sundlaug with nearly one hundred and twenty in the country. Without the plazas of Spain or Italy nor the pub culture of England and Ireland, Iceland’s social space is the communal pool.

After hikes through some of the most beautiful, rugged landscapes, albeit cold, windy, and rainy, my chilled and sore body craved a respite. I found that nirvana time and time again soaking, but I wasn’t alone. Whether I went to the sundlaug early in the morning or as late as eight in the evening, there were others. I witnessed grandmas watching their grandchildren during swimming lessons, young students for physical education classes, tattooed workers post-long days at the fish factory, athletes, and visitors like me.

At the sundlaug, there was no way around being exposed. Before entering the pool, all must shower bare-naked. This was crucial with regulatory signs indicating which areas you were to wash. Then upon exiting the hot showers, the fit, fat, hairy, hairless, young, old, rich or poor picked between lap swimming in heated pool, the kiddie pool, slides, sauna, or various hot pots ranging from warm (38 degrees C/100 degrees F), warmer (40 degrees C/104 degrees F), and too warm (45 degrees C/113 degrees F).

Under these circumstances, I would think many would be shy, but not in Iceland. The hot pots, kiddie pools, and saunas were full of people chatting, gossiping, and telling jokes.  Some engaged me in conversations wondering where I was from as I couldn’t blend in with my South Florida tan. The most memorable chat was a curious, seven-year old girl.  While I was getting dressed and she bare-naked, she asked, “Where are you from?” I answered, “From the United States.” As I continued putting on my make-up, she showed me her Lego creation from school, which was a swan. Although I expressed interest in her piece of art, she set it down and asked about my politics. Of all places, in the locker room in rural Iceland, I didn’t think I would be grilled on politics.  However, when in Iceland, do as the Icelanders do, even the wee ones.

Best of Sundlaugs, Pools, and Hot Springs in Iceland

Of the dozen public sundlaugs that I experimented, I found the crème de la crème in Akureyri, the second largest town in Iceland in the far North. This modern facility had two heated pools, three large hot pots all with jets, a sauna, a large kiddie pool, and amazing water slides. I hadn’t frequented water slides since my last visit to a water park probably a few decades ago, but it felt right. It was chilly out (4 degrees C/40 degrees F), but the sundlaug had thought of everything. The stairs to the top of the three-story, spiral slide platform was enclosed, keeping us all warm enough. It was approximately 900 Krona (roughly $9) for this epic soak.

The most affordable option of Icelandic soaks would be the natural hot springs. There are many off road hot springs, especially in the Highland areas, but I did not rent a 4×4 vehicle. So my options were to go on foot. Within about a forty-five minute drive from the capital outside of a small town called Hveragerdi, there is a valley of springs and trail called Reykjadalur. Its gravel trail leads you three kilometers to a natural hot springs. Bring a towel and flip flops or water shoes. Although the trail is easy and the roundtrip distance not far, I would gauge a half-day for this as the soak is worth relishing. Although you want to get in as soon as you see the springs, the farther up you go the warmer it gets.

Although I did the two most famous, the Blue Lagoon and the Myvatn Jardbodin, my favorite private pool was in Fludir called the Secret Lagoon. It is far less crowded and less expensive (approximately $30). It is located on the South side of Iceland perfect for adding it to your itinerary after Gullfoss or Geyser. Plus, if you enjoy having a beer or wine, they have a small café where you can try a Viking, Gull, or even champagne.

Perhaps it isn’t a mystery why Iceland has been ranked as one of the happiest countries in the world? Could Sundlauging be the answer to a happy life? Maybe it’s worth a soak to test it out yourself.

About Heidi Siefkas: Originally from small-town Wisconsin, Heidi hangs her hat in South Florida. However, as an adventurer, she’s rarely home for long. Heidi is author of three books When All Balls Drop, With New Eyes, and Cubicle to Cuba. Follow her adventures and be inspired www.heidisiefkas.com, Facebook, and Twitter.