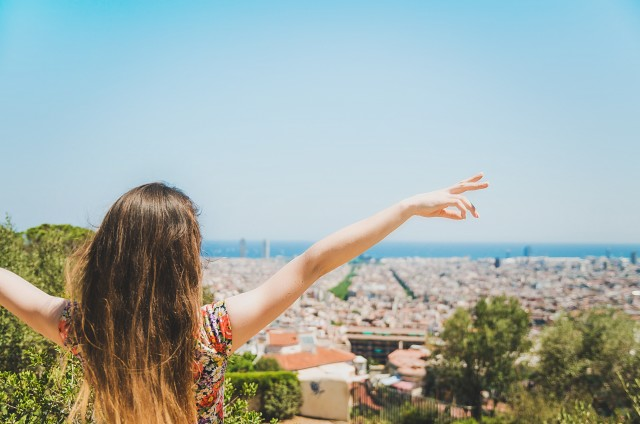 Today’s Culture with Travel post is by Nika Godard

My mother always used to tell me that a change is as good as a rest. So, for the last year, I decided to put my professional career on hold and dedicate myself to traveling the world, and making memories I could treasure for a lifetime.

What I found were some amazing places that gave me wonderful new perspectives and gained the inspiration to motivate me to think bigger in my personal life.

My journey took me all over Europe, as I tracked down the sites that friends and family insisted I had to see at least once in my life. There are memories that I will never stop treasuring.

With origins dating back to the Seventeenth Century, the Fete des Lumieres, or Festival of Light, now take place all over the world, but I was determined to see where it all started, and packed my bags to Lyon in December. Over four days, the city was transformed by stunning illuminations on many of the town’s biggest landmarks, with many captivating displays that gave a magical aura to an already very picturesque environment.

Locals told me how the lighting installations get more and more elaborate every year, and seeing these fabulous designs scattered all over the place certainly made me take their word for it. The festivities came to a climax on December 8th, as the whole town set candles in their front windows, lighting up every road and street. The whole town came alive for the event, and made for one of the friendliest evenings out I had on my travels.

I love partying with carnivals, so there was no way I could miss out on Europe’s biggest street party. There’s no better way to celebrate the end of summer on the last weekend of August than heading to Notting Hill in West London for two days of nonstop music, dancing, and merriment.

London’s massive West Indian community took to the street to lead the event, and I saw flotilla after flotilla packed with dancers in stunning costumes grinding their hips to pulsing bass music from an incredible range of music genres including reggae, calypso, hip hop, and dancehall.

Attending both the family day on Sunday and the more adult-orientated celebration on Monday, I was struck by how much everyone came together to celebrate and have a good time. We got hit with some rain in the evening, but that couldn’t dampen people’s spirits, and if anything the crowd danced to the music even harder. I came looking for people having a good time, and my mission was certainly accomplished.

Iceland wasn’t the first place that came to mind for my travel itinerary. But, after talking to a couple of my friends who had visited, it soon became apparent that there’s more to this frozen country than meets the eye. After having touched down in the capital city of Reykjavik, an hour’s coach journey put me at the country’s most popular tourist destination, the Blue Lagoon.

My friends told me it was gorgeous, but nothing prepared me for just how stunning the place really was: surrounded by huge mountains on all sides, with natural steam baths year-round (from the heat from  nearby lava flow). I spent the day relaxing in the wonderful waters, and then had a fantastic night in the city, where the people provided a welcome as warm as the pools of the Blue Lagoon did.

I’d been to Barcelona before on a childhood vacation, but I decided I owed it to myself to give the city another visit as an adult. What I found was a city I would happily move to in a heartbeat. I’m a huge fan of art galleries and museums, and the ones in Barcelona are all world-class, exhibiting works from some of the artists who the city left a profound impression on, like Pablo Picasso, Salvador Dali and Joan Miro.

The art is not just indoors – you can find fantastic landmarks all over the city, in particular the work of Antoni Gaudi: the stunning neo-Gothic architecture of the House of Bones and the majestic Sagrada Familia Cathedral were truly awe-inspiring, and typify the way the art seems to jump out at you in this city around every corner.

I had some great evenings on the town as well. This is a city where locals, and visitors, like to party well into the first light of dawn.

I was lucky enough to find a spare ticket to this hugely popular event.  A couple of friends from England joined me in hoisting sleeping bags and heading down to the country’s biggest music festival. Although we queued for hours in the baking heat, it was all worth it after getting that first beer after setting up our tents.

For the next few days, it was as if I was in another world entirely, full of music and color. Everyone there helps create a magical atmosphere, perhaps inspired by the nearby druidic standing stones at Stonehenge.

I managed to see a whole year’s worth of live music in just a few days, from the biggest bands on the planet to hidden gems performing in a small tent we just happened to be passing by. There was so much more to enjoy as well, with spoken word, performance art, and comedy playing all over Dale farm, so that I could have happily spent the whole time there without hearing a single note. I was pretty exhausted by the end of it, but it was more than worth it to experience such a fantastic spectacle up close.

Previous Posts How to Prepare for a Leh, Ladakh Road Trip
Next Posts My Journey to The Grand Canyon