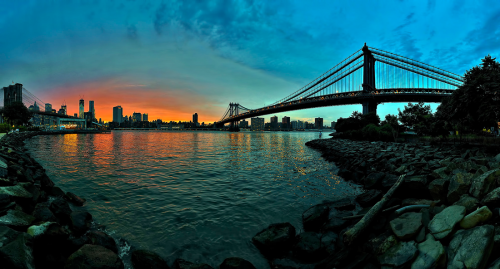 Nancy Blaine has been a resident of New York City since 1983. In that time she has lived in Harlem, The East Village, the West Village, Soho, and Park Slope. She has worked in mid-town, Union Square, Madison Park, and near the Empire State Building. She is a daily bicycle commuter who has seen almost all of the nooks and crannies that Manhattan and Brooklyn have to offer. In her long-term career in higher-ed publishing, she has acquired texts in History, Criminal Justice, English, Anthropology and Engineering. This has made her a life-long learner and traveler which in turn provided the true inspiration for Local Expeditions.

Any town with a large travel industry has a love-hate relationship with its tourists, but none more than New York. New Yorkers will be the first to excitedly tell strangers how to get somewhere—indeed I have seen several people on subways arguing about the best way to tell a tourist how to get to Atlantic Avenue/Barclays Center in downtown Brooklyn. Often the tourist is left blinking and wondering whom to trust, but in generalthey are all correct! There are many ways to get to Barclays, and we each have our favorite. New Yorkers can be wildly helpful, even purveyors of TMI. But…get in front of a New Yorker walking the streets while you’re looking at a map, or holding hands and blocking passage, or taking a selfie, or staring at an iconic building, or obeying the Walk/Don’tWalk signs,and only a power greater than humankind can save you from their wrath.  New Yorkers HATE to be slowed down.

Recently I attended a gathering in Williamsburg run by a group called Travel+SocialGood. It was a great event, and the hosts talked about the love/hate dichotomy and how we can make the tourism industry a more positive experience for each other and for our planet. Much of what was discussed is what spurred me to start my own business, Local Expeditions, in the first place.

My idea, likely not original, is to have locals show tourists around neighborhoods. Instead of suffering three hours trapped on the Circle Line boat cruise or riding on the top of a tippy double decker bus (both tours creating a giant carbon footprint, by the way) I believe people would rather be shown around by locals and see where New Yorkers like to go and whatwe like to eat. There will always be tourists who can and should visit the Empire State and Liberty and Wall Street, but we should also champion smaller, authentic, immersive experiences like the ones Local Expeditions offers. Here are some examples:

CitiBike DUMBO starts at a CitiBike kiosk at the base of the Manhattan Bridge. We ride over the Manhattan Bridge,an experience shared by only a small percentage of New Yorkers, and ride to a kiosk on the other side in DUMBO. Then we walk through DUMBO while discussing basic historical facts, really as much as most people want to know, and then we go to a block of shops. The Guide points out favorites so as to not waste time in a shop too expensive or too traditional. Next we eat at a favorite bakery wherethe Guide buys a treat for everyoneand then onto more DUMBO sights. Last, we go to a CitiBike kiosk on the other side of DUMBO and ride back over the Brooklyn Bridge, arguably the most beautiful, most iconic and most interesting bridge in all of engineering history. Carbon footprint? Hmmm, maybe the impact of the oven from the bakery? Tourist irritation factor = low. Why? No one will know you’re a tourist!  Tourists don’t go on the Manhattan Bridge! This does not mean you will not irritate cyclists and pedestrians on both bridges. We can’t expect miracles. We are New Yorkers after all.

Photographing Coney Island is run by a long-time New York City photographer and photography instructor who loves Coney Islandas a subject and as a site. On this trip we meet at Nathan’s but not for a famous hot dog, instead for an interesting shot of a dog! A local photographer sees beauty in the mundane or even in the filthy and the grotesque. A local photographer appreciates the grit of New York as much as the glitz.Carbon footprint? Unless you ate a hot dog and drove there in your SUV, none!

Can there be a tour experience that will never irritate a New Yorker?Is it a bagel without a schmear? Is a New York minute 65 seconds? Are the neon lights not so bright on Broadway? The answer to all of the above is a resounding NO!

But there are plenty of ways to make tours and tourists friendlier. If New York City is going to stay on top of the changing tourism industry, it will need to adapt to a younger, more tech savvy, less regulated and more environmentally friendly crowd.