Iceland is Hot! And Not. 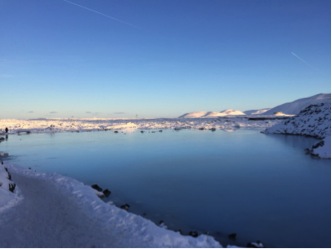 Today’s guest post is by Nancy Blaine of Local Expeditions.

I recently got a Groupon forwarded from my sister: “April and I are going to Iceland in December. You and Kate want to come?”

$800 for airfare, a three-night hotel stay, and two tours.

Iceland is doing some amazing things to get visitors to come to its rocky shores. Icelandair offers an overnight stopover in Reykjavik between US and European destinations. What a great idea! For no extra airfare, you get to see Reykjavik (and who is not curious?) and spend a little money in the country to boot. They are also offering Stopover Buddies—Icelandair employees who will show you around for the day. For a cost, of course, but I really like the idea. Similar to my own company, LOCAL EXPEDITIONS, this gives you an insider’s perspective of a geological wonderland—and a geological wonderland it is.

When we landed in Iceland at 6:00 a.m., it was dark—very dark. In December, the sun rises at around 11:00 am and sets at around 3:00 pm. Naturally worried about the weather in Iceland in December, I asked a friend who had spent a lot of time there on film shoots. Your film friends know Iceland a lot better than most of the rest of us Americans because they have been shooting films there for years—the moonlike landscape is a draw. She told me that Reykjavik is similar to December in New York—hovering at around 32 degrees and gray. The problem is, who can tell what’s going to happen these days? I mean New York just got 30 inches of snow. When we exited the airport to find our bus, the wind hit us at about 45 miles an hour. Tiny pellets of sleet were pinging our faces. Kate and I were laughing at how abysmally bad the weather was, but others in our group had already begun cursing the continent. Before we even got on the bus at the airport I actually heard someone exclaim, “This was a HUGE mistake!” Thus the beginning of the biggest dread I had regarding Iceland—riding on the bus with a bunch of tourists. Here’s the thing: Doesn’t anyone who travels to Iceland in December know that it might be wildly crazy weather? For $800 you suck it up. Not only that—enjoy it! Feel the difference in lifestyle. Bring warm clothes. Imagine what it’s like to live here and be curious about those who do. That’s what traveling to different places is about. If someone never wants to go to Iceland, I respect that. Know thy self, I say. But don’t go to Iceland and be pissed off at the high winds.

Anyway, our guide Oli told us that Iceland is experiencing really unusual weather in the form of these high winds. Even for Iceland, this was extreme. Awesome! Extreme even for Icelanders. Lucky us.

So, the downside of my trip was spending way too much time on a bus with really unhappy people. But, there is a lot to recommend Iceland.

First, we saw the Northern Lights. Indeed, the sky gave us a show that I will never forget. Some on the bus felt that the lights looked better in pictures. It’s true the pictures are more colorful, but who cares? You are standing under the stars and the sky is glowing and dancing and you feel the cold and the thrill because you are there—in the Arctic on a tectonic plate! If you want a picture, stay at home and Google it.

Second, we swam in the Blue Lagoon. This is a country with geothermal heating. The earth’s core heats the island. It’s quite remarkable. Oddly, the Blue Lagoon is not entirely natural—a scientist saw all of the geothermal activity there and so they built the pools above­––­but it is a truly beautiful experience if a little crowded. Imagine a huge thermal pool with caves, bridges, and bars for beers or smoothies. The water temp is about 102 F. The steam is so dense that if you lose your companion there is a strong chance you won’t see them again until the locker room. Even there though, where I was ultimately relaxed and really enjoying myself, I heard an English tourist complaining that she was shocked, “shocked I say,” that there were no private stalls in the women’s locker room for changing. Seriously?

Third, the food is good. Not amazing, but really good. The fish, especially, is very fresh and the skyr is our new favorite thing—think creamier than even Greek yogurt but higher in protein and lower in fat. What’s not to like? In New York I now buy Siggi’s.

Okay, let’s get back to the weather. Remember when I told you that Oli told us that this was unusual—even for Icelanders? On our third and last night there, we were required to be inside by 5:00 pm because of unusually high winds—65 miles per hour. Everything shut down on our last full day there and as a result, the tour we were most excited about—the volcano and the natural geothermal pools—was canceled. As you might have guessed, this led to a hotel lobby full of very angry tourists. Ironically, these were the same ones who didn’t want to be there in the first place because of the cold, but now they are annoyed that they can’t go out in it. Our tour company was great and gave us a full refund for the day—which can’t be easy for a small tour company, so I really respected that since I run one myself.

The takeaway? I’m going back. Yes, I am. But, I am probably going back in summer when it never gets dark and the weather is not so unpredictable. I have no intention of ever getting on a tour bus again though. I would rent a car and drive myself to all of the places that we either went to or were supposed to go. There are hardly any roads, it is safe (except maybe the weather?), it is lightly populated, it is full of natural beauty and natural extremes, and you get to eat a lot of skyr. My favorite singular fact about Iceland: It is the most peaceful nation in the world and does not have an army. Because of this, Yoko Ono chose Iceland to build her tribute in light for John Lennon. Imagine. You have to love that. Oh and…they just jailed about 26 bankers for putting the country into debt. What a concept!

Nancy Blaine has been a resident of New York City since 1983. In that time she has lived in Harlem, The East Village, the West Village, Soho and Park Slope. She has worked in Midtown, Union Square, Madison Park, and near the Empire State Building. She is a committed bicycle enthusiast who has seen almost all of the nooks and crannies that Manhattan and Brooklyn have to offer. In her long-term career in higher-ed publishing she has acquired texts in History, Criminal Justice, English, Anthropology and Engineering. This has made her a life-long learner and traveler, which in turn, provided the true inspiration for Local Expeditions.

Previous Posts Granada's Unspoken Side: 12 Ways to Blend in with the Locals
Next Posts How did I become an Austrian lady... or not?