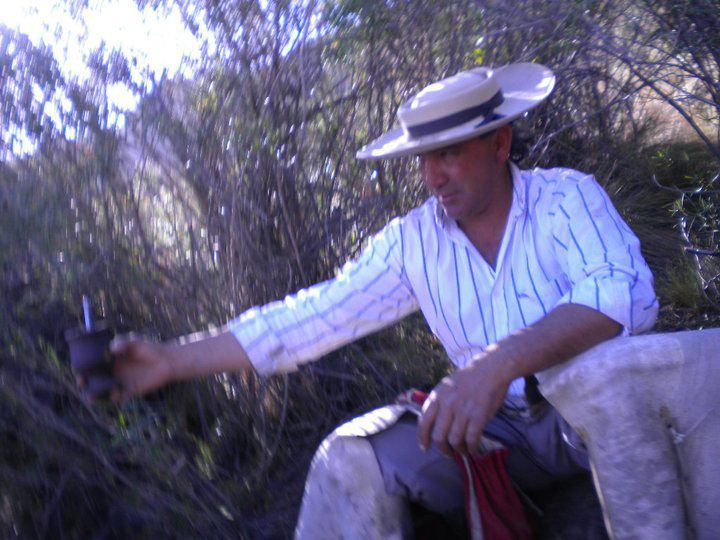 In 2010, I went on my first backpacking trip to Argentina. That was my first time being on another continent and it was an experience that changed my life. Since then, I have been traveling quite a bit and I believe that backpacking is the best method. Getting to know different cultures and people changes your view on life and brings about a totally different life-learning dimension. Backpacking is a very ‘personal’ way of traveling, because you are always in touch with local people and other travelers.

So there I was, in Buenos Aires, where I luckily have a friend that I met while studying in Spain. We were walking around beautiful Buenos Aires when I noticed that there were many people with thermal flasks. I was there in the summer, so it was kind of strange seeing people with thermoses on their shoulders on a hot summer day. I asked my friend, “Why?!” And then the word Yerba mate came out of his mouth. I didn’t have a clue what it was. Because my friend is a very open person, and the majority of Argentinians are like that, he asked some random people on the street if I could have my first sip of Yerba mate.

My first impression was that it was a bit complicated to drink. You have to have a thermal flask, loose leaf tea, gourd and bombilla. Why would people take all that stuff with them to drink Yerba mate? Now I know. So, there we were on the street, chatting about Yerba mate and sipping it from a gourd. I didn’t like the taste too much at first, but they were telling me about why they drink it and that they don’t drink coffee. They also told me that many people drink it because they are poor and that Yerba mate suppresses hunger. Sharing Yerba mate is a tradition. It is a social event that brings people together. You never forget the first sip!

But, I will never forget my second sip of mate neither. It happened two days later while I was walking through one of the many of big city parks. It was already dark and a boy came out of nowhere screaming, “Esloveniaaaa.” I come from Slovenia, so I was totally confused how that little guy knew where I came from. I was in one of the biggest cities in South America. But in actuality, that boy was around when I took my first sip two days prior. The people I was with noticed me somehow and sent the boy after me to come to drink mate with them again. Quite a coincidence.

I continued travelling around northern Argentina drinking mate with different people and I started to really like it. What is nice about mate in Argentina is that drinking it is a time to sit down, take it easy and hang out with others. It makes you feel welcome as all people are drinking it from the same straw. Currently, I am in Canada and nobody wants to drink mate with me from the same straw.

When I got back home to Slovenia, I had the idea to import mate. But soon I figured out that in the same city where I live somebody already does it, which is not bad at all. Since then I’ve always had Yerba mate in stock. I brought gourd and bombilla with me from Argentina and people looked at me strangely as I was walking around the city with a thermal flask in the summer.

Now I have moved to Canada, and I live close to a Yerba mate bar. I still haven’t found any similar place in the city where I live. Lucky again. Yerba mate is still my favorite beverage mainly because of its benefits. When I drink it, I feel an increase in physical energy and enhanced mental function. I always drink it before playing soccer, because Lionel Messi does it too, and I’m always drinking it when I am working on my Yerba mate blog. Yes, I even started to write a blog about it.  I believe Yerba mate is very good alternative to coffee and in many cases even better. Many people still don’t know much about Yerba mate, so I hope that my blog will contribute to awareness about it.

Short BIO: Alex is a Slovenian, currently living in Toronto. He is so enthusiastic about Yerba mate that he started to write a blog about it. His dream is to be able to live from his website’s, be location independent and travel around the world.  Check out Organic Mate on Facebook and Twitter.