Rome Puts the Art in Artichokes 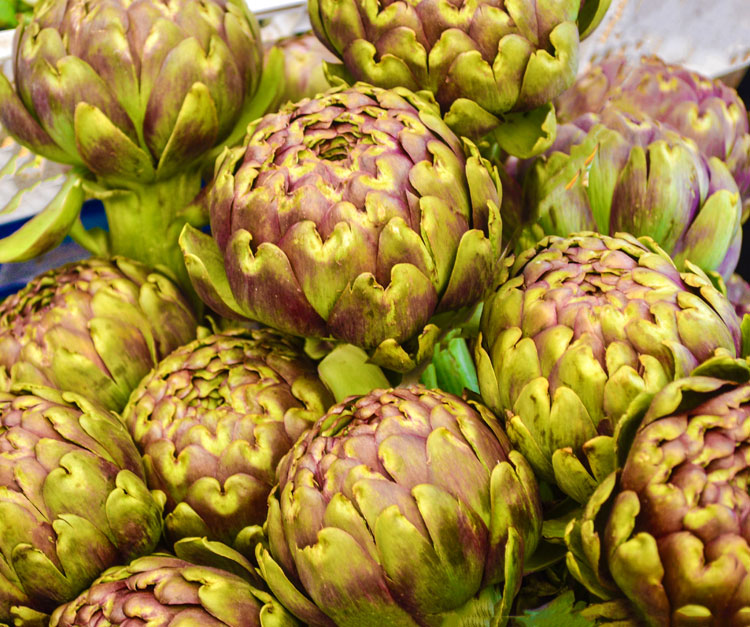 I’ve never taken much notice of artichokes. They’ve always seemed rather unremarkable to me.

Maybe it’s because my experience with them is limited to dipping tortilla chips in a bowl of artichoke and spinach dip or ordering an artichoke omelet when I see it on a breakfast menu.

But when I traveled to Rome in March I found myself in the midst of spring artichoke season.

These humble vegetables were the featured exhibit in a gallery of edible art and I was anxious to make their acquaintance.

I spent a week with Elizabeth Minchilli, author of Eating Rome, and a group of foodie devotees, as she took us to her favorite Roman bakeries, coffeehouses, wine bars and trattorias.

From reading her book and blog, I knew Elizabeth was an artichoke aficionado with a special passion for the deep-fried version, so I was looking forward to trying one.

My first encounter with Roman artichokes was at one of the city’s most famous open air markets, Campo de Fiori.

But before checking out the gorgeous array of fresh fruits and vegetables, we first fortified ourselves with a slice of pizza bianca at Forno Campo de Fiori, considered one of the best bakeries in Rome. You can watch the bakers work through the front windows as they serve hot pizza bianca all day long.

This is apparently the only food {along with gelato} that’s acceptable to eat on the streets of Rome.

And that’s only because pizza bianca is meant to be eaten hot, as soon as it comes out of the oven.

I didn’t expect to love this unassuming paper-wrapped warm slice of dough, but it was simple and delicious.

Fresh out of a wood-burning oven, brushed with olive oil and sprinkled with sea salt, it was one of the best things I ate in Rome.

{And it even has me thinking about buying a pizza stone and researching recipes for dough to see if I could attempt a facsimile.}

It was hard to pull my attention back to the artichokes but Elizabeth asked a man cleaning a basket of them to peel one as a demonstration for us.

{Unlike grocery stores at home, buyers do not touch any of the produce at the market unless you want loudly scolded by a vendor.}

I’d always heard artichokes were tricky and time-consuming to prepare.

But in what seemed like less than a minute, he picked an artichoke out of his display, peeled it effortlessly and dropped it in his turquoise bucket to soak.

Now that I’d seen them raw at the market, watched them peeled and cleaned, I was ready to eat one.

Unlike other varieties of artichokes, Roman artichokes are entirely edible, without the prickly skin and spiny choke.

There are several ways Romans eat artichokes but I was about to try the Jewish version or carciofi alla giudea at Ristorante al Pompiere.

This restaurant is practically hidden away, tucked in a residential piazza in the historic Jewish Ghetto neighborhood of Rome with just a small sign over one of the windows, pointing the way.

I walked up two flights of stairs to enter an elegant dining room with lovely frescoes on the ceilings and large windows lining the room, letting in plenty of light.

Elizabeth said she’d already ordered for us as she passed around bottles of wine and water.

Since artichokes are considered an appetizer in Rome, I was envisioning maybe a basket of them to split among the table, but instead the biggest artichoke I’d ever seen was placed on a plate in front of me.

It was strangely appealing.

In an avant-garde sort of way.

It was a toasty shade of brown because it was deep-fried, but it was completely whole and there was no accompanying sauce for dipping.

I wondered how to eat it.

Was I supposed to pull the leaves through my teeth? Although I’d read about this leaf-pulling process, it seemed a bit daunting to me and I’d never actually tried it. Thankfully Elizabeth saved me.

“Just cut it in half and eat it with a knife and fork,” she instructed. “You can eat all of it, even the stem!”

As my knife slid into it, some of the crispy leaves fell away, but after watching everyone else at the table, eating the leaves as finger food seemed perfectly acceptable.

The artichoke was scrumptious. Unbelievably delicious. It had a flavor unlike any of the artichokes I’d eaten at home. And since I’m a rule-follower at heart, I had no problem following Elizabeth’s directive to eat every bite.

But lunch had just begun.

Bowls of creamy fettuccine al Limone, a pasta with a rich lemony sauce were served and then as is customary in Italy, the salad arrived as the last course.

It was a plate of curly, crispy chicory with a vinaigrette dressing made from chopped anchovies.

Even though I wasn’t sure about eating what I considered distasteful little fish that I’d never want on my pizza, I took a forkful.

I discovered as long as I didn’t think about the anchovies too much, the salad was actually quite good.

My first meal at an Italian trattoria serving classic Roman food was nothing short of a masterpiece.

But I think my perspective of artichokes has been redrawn since my introduction to the artful Roman version, and I’m not sure the ordinary garden-variety artichokes can compare.

I think there’s nothing else to do but get started planning another Roman holiday, of course.

Previous Posts Horchata: A Traditional Drink From the Andes in Ecuador
Next Posts The London Experience – What You Need to Know