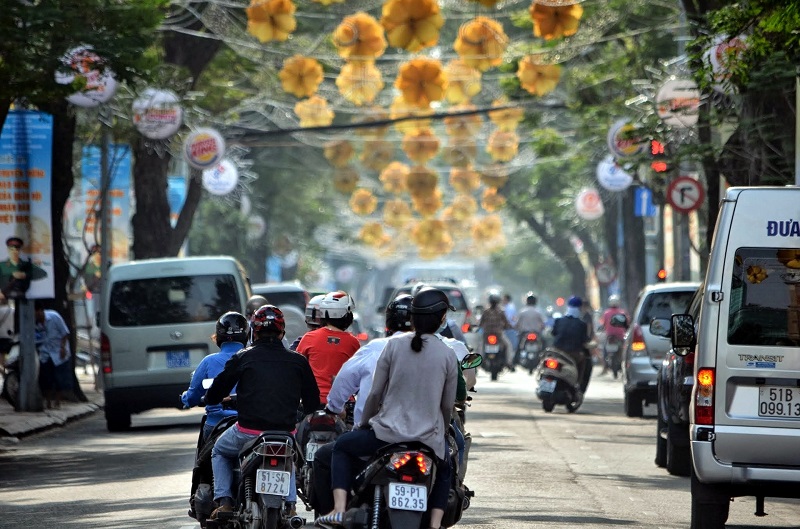 Today’s Culture with Travel post is by Luna Anderson

If you are wondering where you should go to for the next adventure, choose Vietnam. I visited this beautiful country to see my friend Janet who is an English teacher. She spent a week showing me around and then let me complete my adventure on my own.

Regardless of how much my time passes, I’m sure that all the memories there will never fade in my mind. Vietnam is a fantastic place to discover. Indeed, not everything is good, but it’s worth a try.

In my short time in Vietnam, I stumbled from one surprise to another. Some things I enjoyed to the last drop, while others made me gasp in horror and unbelief. But overall, I have to say that the trip was unforgettable and you cannot find things like it anywhere in the world.

Street food is one of the trademarks of Vietnamese culture. Folks eat on the street almost every day, and the image of vendors going along the roads is what tourists cannot forget after leaving the countries.

I have tried many kinds of street food in Hanoi and Hoian city. Pho in Hanoi is the best. In my locality, some small restaurants were serving Pho, but the taste and aroma are different from those of the origin.

Grilled dishes in Vietnam have a unique taste. They are quite inexpensive, also. I thought my tummy was going to explode with pork, beef, and seafood, but the price for the meal was surprising.

It would be my thoughtlessness if I forgot to mention the balut, an infamous Vietnamese treat. At first, I was afraid of what people had said about it, but then I thought my adventure would not be perfect without one risky try. Now, I don’t regret trying balut. I tried to forget about the baby duck inside the egg and enjoyed it just like regular cuisine. The taste was fantastic. If you want to have a strange, but satisfying culinary experience, remember to add some spices and eat the egg with the provided vegetables.

I didn’t try dog meat, although people said it was delicious. I couldn’t bring myself to forget the images of lovely dogs now turned into food for people.

Scenery was the best part of the adventure. I love the landscape of Vietnam from the North to the South. The beaches are poetic, and the mountains are spectacular. My short visit to Halong Bay was unforgettable. It is a lovely small island with breathtaking views of both mountains and the sea. The water there is crystal clear, though the sand is not so smooth.

The West North of Vietnam is featured by unique rice terraces, constructed by hand thousands of years ago and still in use nowadays. The culture of local ethnic minorities there adorns the beauty of the region. If you wake up early in the morning in the West North, you will see the colorful tribes floating in the cloud.

Janet and I went camping on a hill in Sapa city of Laocai province. In the morning and afternoon, the weather was fantastic, suitable for staying outside in a tent. However, the temperature went down suddenly at night. Luckily we had a sturdy tent and a comfortable sleeping bags.

Architecture in the cities is admirable, too. Ho Chi Minh City and Hanoi are famous for historical buildings with nostalgic atmosphere. However, you should consider visiting Hoian city. Ancients houses and streets there is the combination of Western and Vietnamese cultures, with some influences from Japan.

Most citizens in Vietnam are friendly. I say so because I didn’t have the chances to communicate with people from all 63 cities and provinces. But the youth are hospital and cheerful. They are willing to help every tourist if we seem at a loss. A lot of young guys and gals are fluent in English, though the accent may be a barrier.

People in Vietnam are all lovely and straightforward. They tend to smile with foreigners. I know in some countries, people are not like this. Many tourists have reported that they were treated as aliens and didn’t get the response even after asking for help.

In the cities of Vietnam, such as Hanoi, Danang, or Ho Chi Minh City, you will never feel alone. Whether you choose a cafeteria or a nightclub to spend sometimes getting to know the locality, people there will drown you with chit-chat and compliments.

It is not so peaceful! There are a lot of motorbikes on the streets. Before visiting Vietnam, I had heard that there would be many of them, but the reality was shocking. In the rush hour, the roads are packed with vehicles, most of them are bikes. People horns often and there are traffic jams everywhere. Some young guys didn’t even stop when the traffic lights are on, which were terrible.

Some foreigners coming back from Vietnam said that crossing the streets is the most distressing when they were there. I tried several times, and I think I caught the tips (yay me!). To cross the street safely, you should go to the zebra lines. If there is no line, stay calm and walking across the road, while observing the oncoming vehicles. Though their speed seems very high, people there have some kinds of instinct to avoid crossing pedestrians.

Once I saw kids rushing across the road without any hesitation, but people on the motorbikes didn’t seem minded at all! That was what made I gasp in disbelief.

Vietnam is a beautiful, peaceful, and friendly country that you cannot find one the same in the world. Though something there still need improvement, I believe that it will keep becoming a fascinating destination for tourists from all over the world.

I would like to come back there one more time soon since my friend said that many things have changed from the last time I was there. It is understandable because the country is still developing. I just hope the changes are for a better environment. It will get Vietnam closer to an ideal nation.

About the Author: Luna Anderson is avid camper from Phoenix, Arizona. She loves outdoors and she wants to show people the endless possibilities of this world and open your mind to experience over possession. You can find practical tips about hiking, camping and survival skills in her blog hikertrack.com.