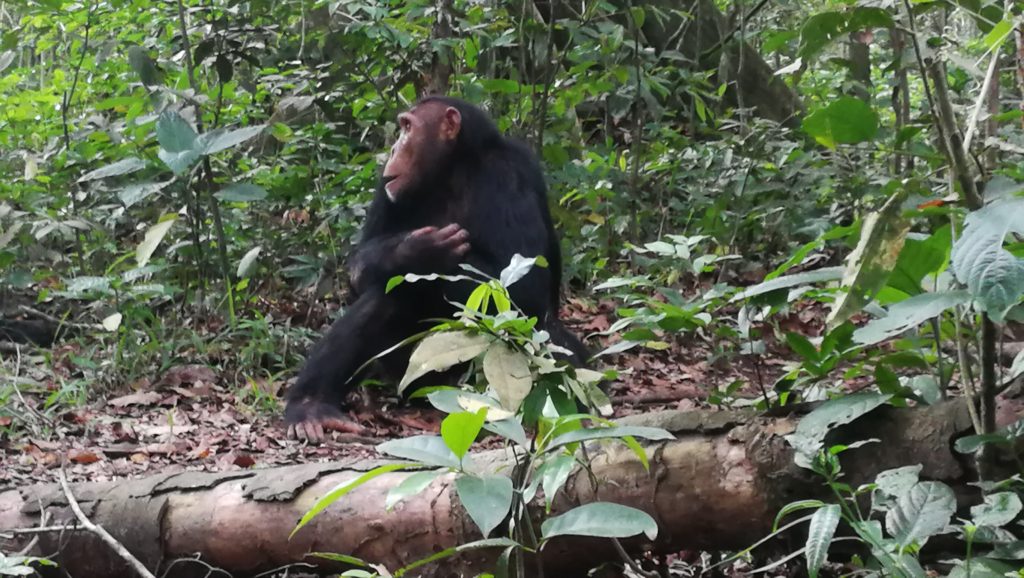 Today’s Culture with Travel post is by Nakatagi Janiffer

If you ever go on an African safari, there are certain experiences you should not miss out on, and among them is chimpanzee trekking.

Chimpanzee trekking is a leisure activity popular in major parks and in Uganda, its carried out in the safari regions of Queen Elizabeth national park, Kyabura wildlife reserve, Kibale national park and Ngamba chimpanzee sanctuary.

I chose the Kyabura wildlife reserve, which is part of Queen Elizabeth national game park, located in the Kasese district.

How to get to Kyabura wildlife reserve

Planning and preparing is the number one step that should be taken by every traveler. I had already made calls in Kasese to make sure my private hired car was ready.

I also had to pack everything I needed, apart from my own essential items. I had to pack the necessary items for anyone going chimpanzee trekking including jeans, a rain coat, hiking boots, and a backpack.

The Kasese district is an 11-hours’ drive from Kampala. I decided to take a bus to Kasese since it’s cheaper.

Buses heading to Kasese are found in Kisenyi Bus terminal found opposite the KK trust Hotel in Kampala. It cost $10 bus, and I’d advise to use LINK BUSES.

I decided to hire a private vehicle in Kasese to go to the various destinations like Mountain Rwenzori, Kisenyi, Lake George, Kaziga channel for boat cruising, queen Elizabeth for game driving, and it cost me around $40 with a driver included, but I had to purchase my own fuel, which was a good deal.

If you’re on a limited budget, taking the bus for the 11 hours drive to Kasese is cheaper because it would cost you around $200 to hire a car from Kampala to Kasese.

There are various car rental companies in Uganda – just search for them online, if you are interested in getting one.

In Kasese, it’s very easy to find a hotel, even if you didn’t pre-book. I arrived in Kasese at 11 pm, and I was scared because it was so late and the region has dealt with instabilities, which have also contributed to multiple deaths.

Despite it being late, I managed to find the Tropical Savannah Guesthouse. The rooms have a double bed, bathroom and toilet, closet, television, and this was ok for the night. I didn’t like the bathroom because it was so small, and had to look for another hotel the next day, which cost less with enough space. In most cases when traveling, all I care about is the cleanliness of the place.

You can also find excellent, elegant and attractive hotels in Kasese including the Silver Springs Hotel, or the Mweya Safari Lodge.

Having access to Kyabura Wildlife reserve will require you to pay access to Queen Elizabeth National Park. It’s $40$ for foreigners, $9 for Ugandans, $50 for chimpanzee trekking and $10 for the car entry in the park.

The park is quite big. I had a game drive for only 3 hours and was already feeling tired and needed to rest. After all, I was going chimpanzee trekking at 2 pm.

There are various art galleries along the way, and a nice view from the lake. I also had an opportunity to see the tropical forests of Maramagambo, which have tall trees and evergreen vegetation.

Walking to the Gorge

Now, it was time to go unveil the hidden mystery of chimpanzees in Kyabura. Getting there is a bit difficult, so you really need hiking boats because the slopes are sloppy, and there is a river down the inclines. I almost fell down 3 times until I succeeded to reach the bridge.

When we entered the gorge, we had to walk around following the trails of chimpanzees in order to find them.

How it felt being close to chimpanzees

After walking for a bit, we found the chimpanzees. At first, we saw only one little chimpanzee on top of the tree, and as we walked closer, we spotted more of them.

The chimpanzees surrounded us, this was simultaneously amazing and scary in that moment.

One chimpanzee came close to us and sat in front of us – it actually began posing for pictures.

Since they were now on top of the trees and some down, they began screaming all together and shouting so loud, my breath became faster. At that moment I was happy, nervous, laughing and frightened of something wrong happening to me.

The chimpanzees also punished the little chimp; I was told they were disciplining her to behave better.

We continued walking in search of more chimpanzees. The next group of chimps we saw came close to us, while others were on top of the trees silent.

Hilariously, there came a point where one chimpanzee was about to puke on my head. I was lucky I saw that coming…

Did you know that if one chimpanzee dies, the rest have to come together at that place where the dead one is? They stay there until the dead one rots and vanishes.

I learned a lot from my experience with chimpanzees. Coming close to a chimpanzee not only causes you to feel butterflies but also leaves you with a moment that you can’t explain yourself.

Nakatagi Janiffer is a traveler and a blogger who spends most of her time traveling and doing activities like gorilla and chimpanzee trekking. She writes most of her travel stories at traveliry.

Previous Posts A Shakespearean Cultural and Dining Experience in NY
Next Posts How to Prepare for a Leh, Ladakh Road Trip