Eyebrow-Raising Border Lines in the USA 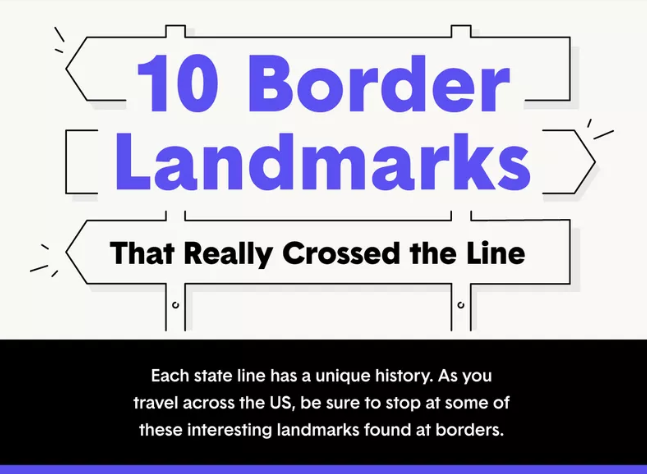 Sometimes, the best parts of a road trip are the moments you stumble on little-known landmarks. They’re unique in their own ways, even if they don’t gather quite the attention of more famous landmarks like the Statue of Liberty and Times Square. These hidden gems are sometimes unexpected and they often come with a unique backstory!

That’s the case of some obscure border landmarks across the United States. Aside from the U.S territories like Puerto Rico and Guam, the final state lines were drawn in 1959, with Arizona, Alaska and Hawaii being the final states.

That being said, there remains some unique mapping errors and quirks leaving some border towns left to wonder which state they actually belong in.

For instance, the California-Oregon border divides the tiny town of New Pine Creek. As a result, many residents carry California licenses but have Oregon addresses –– talk about confusing.

The Hoover Dam also has this unique dual-state status. It’s split between the Nevada-Arizona border and over the Colorado River. That means you can stand on two states at once and also between two time zones!

The only place in the country where 4 states meet is known as The 4 Corners. Here, you can use your arms and legs to be in Colorado, Utah, Arizona, and New Mexico all at the same time. At the center lies a designated mark with lines so you can see which parts of the land belong to each state.

At the Virginia-Tennessee border is the town of Bristol. Because it’s located right on the border between these two states, this town shares a library, a fire station, and water supply –– even though they’re technically two separate towns.

Other destinations were transformed from of their original use. On the California-Mexico border lies the Casa Del Tunnel. It was once an entrance to a narco-tunnel leading to a manhole in a San Diego parking lot, yet it now serves as a vibrant art center with a gallery and community garden.

At the northernmost point of the contiguous US is the Northwest Angle. It’s located at the Minnesota-Canada border, and you have to cross through Canada to reach it by land. That means while you’re enjoying the beautiful Lake of the Woods in Canada, you may accidentally run into a big blue sign that welcomes you to The United States –– just be careful of border security!
These locations leave people scratching their heads as they figure out which state(s) they belong in and these landmarks and borders of the United States contain distinct characteristics and history. Whether you’re taking a road trip or visiting in a nearby town, you’ll want to stop by at these border landmarks. You could even snag a t-shirt and snap a pic at places like The Four Corners so you can show off that you’ve been to 4 states at the same time!