On Home Swaps and Special Friendships 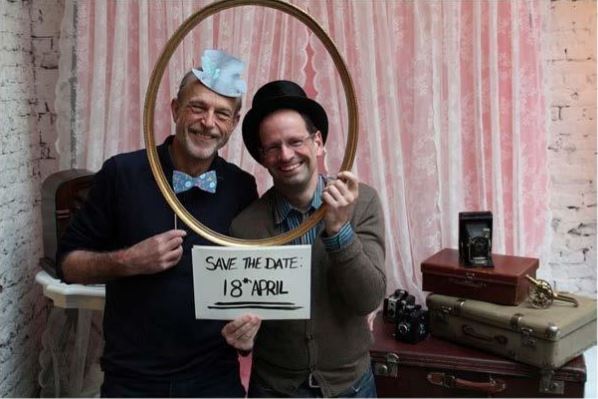 In 2006, I did my first home exchange between my Jersey City, NJ apartment and a house in Alkmaar, Holland. It was new to me, this home exchange adventure, but it was the only way I could afford to travel. I had only five days vacation from my job at a corporate PR firm, plus one weekend. The dates on the ad that read “Historical Dutch Town for NYC” perfectly matched the dates I had off from my office job.

My exchange partners were Ken, a 70-year-old editorial illustrator from New York who only worked for progressive publications and Dawn, a 65-year-old hospital administrator, originally from South Africa, who owned the house up for exchange. They had, Ken wrote to me, been together a very long time.

The swap came and went and I make friends, online, with Ken. We shared a passion for art, writing (he had published several books as both writer and illustrator and I was working on my first manuscript), progressive politics, and the urgent need to continually discuss our outrage at the massive inequalities and injustices in the world.

We were great online pals, but we didn’t meet in person until three years later when Ken and Dawn were staying in Queens, NY. The next year, my home swap adventure took me to Bologna. I had a 12-hour layover at Schiphol Airport. I took the train to Alkmaar Station, where Ken picked me up and took us both to Dawn’s place. We spent 10 hours talking and eating and hugging and reminiscing about Jersey City and the exchange that brought us together.

The next year an email came from Dawn in May saying Ken had died in April. It wasn’t totally unexpected, but I was deeply saddened. I hadn’t heard from Ken in awhile, which was highly unusual. And the last time I had corresponded with him, he had mentioned something about cancer. I had suspected he was dying.

Ken had such a profound effect on me I decided to write an appreciation of him, a slim volume that I wanted to celebrate his life.  So, I set out, in 2014, to research his life in Bergen aan Zee, where he lived in an artists’ community, in Alkmaar, where he spent time with Dawn, and in New York, where he was from.

Since I was now working as a freelancer, I could take as much time as I wanted to travel. My girlfriend, Lisa, and I decided to spend a month in Amsterdam before heading to Alkmaar for an additional month of research. I had found most of my previous nine home exchanges on Craigslist, just as I found Ken and Dawn there, too. But, I was now also on a gay/gay friendly home exchange site called Home Around The World.

I scoured the ads for listings in Amsterdam wanting to exchange with New York City. I now lived in Brooklyn with Lisa, in the newly trendy neighborhood of Bushwick. We had an exchange set for Alkmaar with a friend’s of Ken’s, his former attorney. She and her husband lived in a large house just outside of the city while her daughter had an apartment overlooking the main canal running through Alkmaar where we would stay while the entire family stayed at our place in Bushwick.

I found Koos and Cees on Home Around The World and proposed a swap for our humble Brooklyn pad with their two-story townhouse in De Pijp. They could do only two weeks in the U.S. and we needed four weeks in Amsterdam. They graciously proposed that we stay in their guest room after they returned.

We barely knew these guys, expect for Koos having stopped by on a layover from a KLM flight he was working.

However, we became very, very close during our stay – often sharing dinner, walking around Amsterdam and having a midnight coffee together, us meeting their local friends and them meeting our expat pals, going to gay bars. We share a love of great coffee and good food, 80s music, queer culture, ribald comedy, architecture, biking, traveling, other adventures, and so much more. They took us to the beach in Bloemendaal, Lisa visited Cees’ school where he is principal, and Koos rented a car and drove us to Alkmaar when it was time to leave.

Stephanie Schroeder is a freelance writer. She has written for The Guardian, The Brooklyn Paper, Curve Magazine, GO Magazine, Lambda Literary Review, and other outlets. Her work has been anthologized in various nonfiction collections and she is the author of the memoir Beautiful Wreck: Sex, Lies & Suicide. Schroeder is half the PR team for Local Expeditions and she keeps a personal travelogue of her adventures.