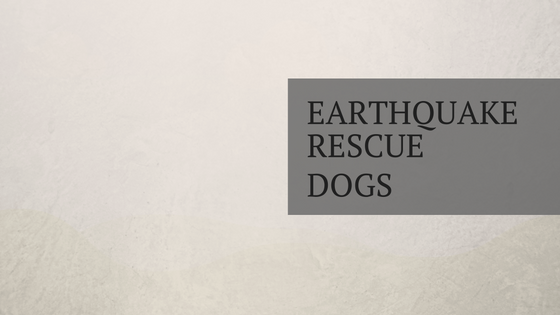 The majestic mountainous landscapes and colorful culture of Nepal had always called to me, and last summer I finally found the time (and money) to tick one more dream off my bucket list and visit this wonderful place. But along with the fantastic scenery, bustling townships, and incredibly friendly locals came a more somber note: the wreckage of the terrible April 2015 earthquake which killed nearly 9,000 people and flattened entire villages.

While I was there, I heard about the amazing work of earthquake rescue dogs and was bowled over by how brave and helpful these faithful canine heroes had been during the rescue efforts following the catastrophic shake. I went on to found out more about how these dogs are trained to help survivors buried in the rubble of a collapsed building, and some of the amazing feats they’ve accomplished.

From the humblest beginnings

Some of the rescue dogs start their working lives coming from dog shelters or rehoming organizations, making the journey from unwanted and sometimes neglected to playing a valuable part in saving lives across the globe. Dogs are thoroughly vetted for potential and receive the best of care before going into training.

Earthquake recuse dogs work mainly by scent, although sight and sound do play a part too. In their training, they learn to follow the scent of a specific person, having being given the smell from a belonging or an item of clothing. They are given the scent and let loose in the area that the victim is suspected to be buried; they return quickly to their handler if they pick up the scent in the rubble and bark to indicate that they’ve found something. At this point, the delicate process of uncovering the person can start, which can take many hours but, if successful, ends up with a shaken and exhausted survivor being pulled from the wreckage. Finding these people would be almost impossible without the help of earthquake rescue dogs.

The stories of the dogs that have worked diligently to help suffering humans are truly touching. Take Yumenosuke, a rescue dog that was due to be euthanized and went on to save people trapped by mudslides in Hiroshima and later worked for five days in the ruins of the Nepal earthquake, saving more lives. Or Dayko, a heroic dog that saved the lives of seven people following the Ecuador earthquake, only to collapse from the strain of his tireless efforts to rescue as many as possible.

Previous Posts Interview with Drew Goldberg | DrewBinsky.com
Next Posts Why Now is the Best Time to Travel to Paris