Why I Protest: Reasons To Protest, 2017 Edition 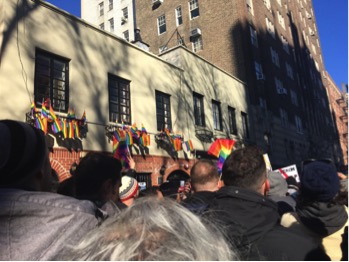 I’ve been to many a protest march. I started protesting when I was in college in Chicago in the 1980s. We were anti-nuke protesters walking out of school and lying down in the streets shouting “No Business As Usual.” In Chicago, I also worked with female political prisoners to get them basic supplies like tampons and sanitary pads. When I lived in Philly, I drove with my then-girlfriend and a group of friends to DC to participate in the 1993 March on Washington for Lesbian, Gay and Bi Equal Rights and Liberation.

In NYC, I marched against the Iraqi War, in support of a woman’s right to abortion, and for LGBTQ rights, among other things.

I currently have been protesting, marching and rallying against President Trump, a racist, sexist, homophobic, Islamophobic, everyone- and everything-hating president backed up by a bunch of white supremacists and neo Nazis determined to turn back the clock on people’s all rights except their own. They are making or abolishing laws and handing down executive orders that feed only their own financial or political interests – and they are stirring widespread fear and loathing.

On Saturday, February 4, I rallied with thousands of folks in front of the historic Stonewall Inn. It was a show of LGBTQ solidarity with immigrants and others persecuted by the dangerous Trump regime. It was also a protest to show Trump that we – the LGBTQ community – will not tolerate having our own rights rolled back.

LGBTQ folks raise protest performance and sign-making to a whole new level. Much like the Greenwich Village Halloween Parade, the costumes, signs and sentiments are edgy, angry, satirical, and also funny and flamboyant.

There were a lot of allies there in front of the Stonewall Inn, too. Among the crowd, straight folks stood with us LGBTQ folks, shoulder-to-shoulder, and the lineup of politicians and celebrities was full of people from divergent corners.

But, I felt a weird vibe up on the stage.

Former NYC City Council Speaker Christine Quinn, who sold Greenwich Village to real estate interests and because of it lost the mayoral election to Bill DeBlasio, spoke. When she inadvertently said “in the next four weeks” much of the crowd, many already grousing about her speaking, went wild, shouting “four more weeks” “four more weeks” until she got off the stage.

There were a lot of “Love Trumps Hate” signs, which I think are overly sentimental – and also wrong. Love does not trump hate in my experience, because if it did we wouldn’t be protesting Trump! A friend said she’d rather see “Love Hates Trump” signs. That’s definitely more accurate.

Senator Chuck Schumer also spoke, but why? I mean the guy wouldn’t commit to voting against all the dangerous and unqualified appointments Trump has made, so I wondered why was he there. He got part of the crowd whipped up, but most folks were pretty wary of his words.

As Andy Humm wrote in Gay City News, “Schumer’s mixed reception is an indication that the resistance to Trump is being driven and led by grassroots activists and not the politicians, as demonstrated at the massive Women’s Marches in New York, Washington, and around the world the day after the inauguration and by the flood of protesters at US airports immediately after Trump issued his anti-Muslim executive order.”

The grassroots aspect of the resistance against Trump gives me hope. I am part of that resistance, and always have been. I will not idly sit by while this fascist regime tries to ruin this country and hurt her people. ALL her people. This is #WhyIProtest

Author bio: Stephanie Schroeder is a writer based in New York City. She has written for The Guardian, The Brooklyn Paper, Curve Magazine, 1st Amendment Media, Lambda Literary Review, and many other publications. The author of the memoir Beautiful Wreck: Sex, Lies & Suicide, Schroeder’s work has also been collected in various anthologies, including That’s Revolting: Queer Strategies for Resisting Assimilation; Here Come the Brides: Reflections on Lesbian Love and Marriage; Easy to Love, But Hard to Live With: Real People, Invisible Disabilities. She is currently co-editing HEADCASE: LGBTQ Writers & Artists on Mental Health and Wellness.