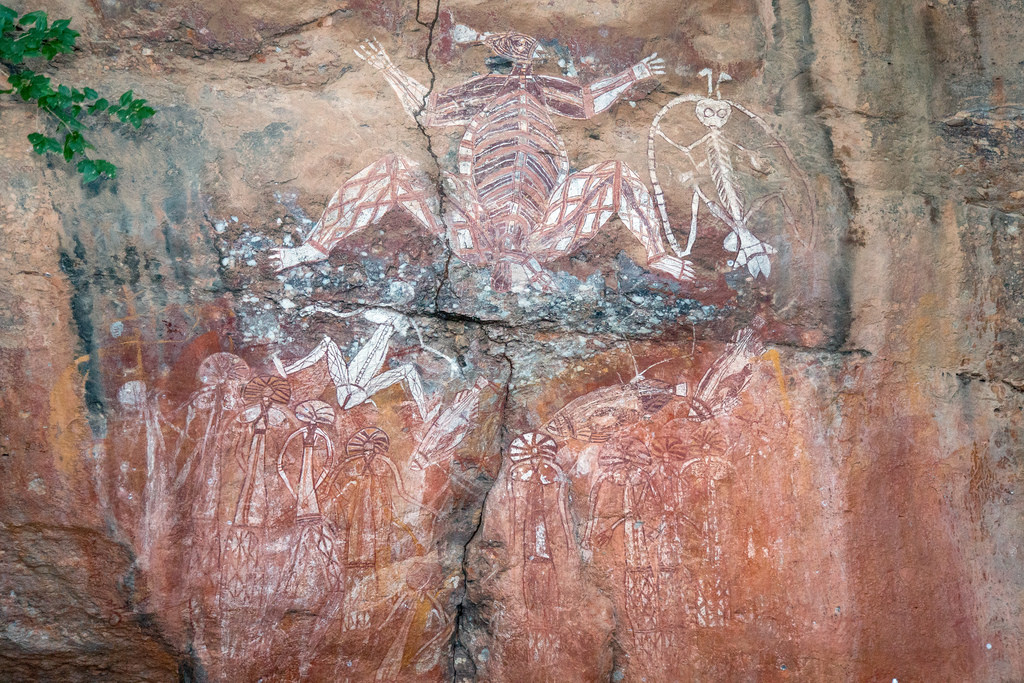 Today’s Culture with Travel post is by Elizabeth Mailey

Aboriginal rock art is unmatched in the world thanks in large part to its history, freshness, details, and range of color. Australia is famous for this particular type of art— with more than 100,000 rock art places that vary in both diversity and complexity in the artworks. Aboriginal descendants can provide detailed explanations and cultural interpretations of each work’s meaning.

Quinkan country has aboriginal rock art collections that are at least 15,000 years old. The rock art work consists of painting of spirits, wildlife, and people. To be able to see this rock art, you’ll need to walk for several hours and from the nortwest of Cairns, it’s about 210km or a four hours’ drive.

Burrup, also known as Murujuga, is in the Pilbara region of Western Australia. Burrup contains one of the world largest collections of rock art, including petroglyphs and carvings. This collection of rock art is claimed to be around 10,000 years old. This breathtaking place is listed among the most endangered places in the world and is among the World Monuments Watch.

The Uluru-Kata Tjuta national park lies at the centre of Australia in the desert. Rising above red-sand plains, it actually dominates the landscape and is cloaked in myth and mystery. Uluru is a cultural landscape that is blessed by the Yankunytjatjara and Pitjantjatjara people.

This traditional landmark is one of the most significant aboriginal lands in Australia. In the national park, there are more than 40 blessed Aboriginal places in the area which contain inherited spirits that is still exist; it is the cultural identity of the Anangu.

The Grampian National Park consists of 250 rock art places, and is considered one of the among the richest indigenous rock art sites in Australia. It’s about a three hours’ drive from Melbourne to this park in Victoria. I thought the most remarkable works included red and white ochre paintings, antique hand prints, and giant emu footprints.

In this park in New South Wales, there were various rock art places which contain huge rock carvings with simple designs unique in Sydney. This national park is located on the Southern bank of the Hawkesbury River that is in the north of the Sydney. It has more than 400 carving places also exploring carvings along with turtles, fish, kangaroos, and dolphins.

The Kimberley region has some of the oldest rock art in the world. This breathtaking place has preserved history from tens of thousands of years ago. Among the most famous rock art is what’s known as Wandjina-style, located in the central areas and northwestern part of Kimberly. Kimberly’s rock art includes depictions of spiritual ancestors with human features.

Another form of it that enhances the beauty of Kimberley is Gwion. This is rock art is popular due to elongated figures, painted wearing elegant dress which was characterized by boomerangs, spears, and other ornaments.

Elizabeth Mailey writes for https://www.australianassignmentshelp.com/ and is now living in Boise, Idaho. She graduated with a degree in modern languages from the University of Perth in 2013. She enjoys sweaty workouts, tasty meals, and trying her best to live holistically, relaxing with yoga, and drinking fruity wine. She also loves sharing knowledge on everything parent & health related.